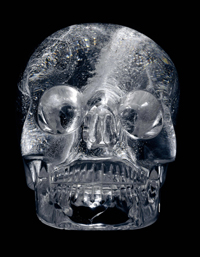 To some people, a crystal skull is simply an object carved from quartz crystal in the shape of a human skull. They can be clear or colored crystal, and they range from crudely carved to incredibly detailed. Some crystal skulls are just a few inches in diameter, while others are life-size. Whether you find them beautiful or creepy, many crystal skulls are representations of amazing craftsmanship. That's part of why some of them have been (and still are) exhibited in the Smithsonian, the British Museum and the Musee de l'Homme in Paris.

But according to believers in the supernatural and the occult, crystal skulls are more than just interesting artifacts. They may represent doom and destruction, or hope and healing. Some people think that crystal skulls can be used like crystal balls to see visions of the past, present and future. They claim that the skulls emit psychic energy, auras or even sounds. Believers point to Mayan creation myths that reference crystal skulls and a story that 13 crystal skulls were scattered by the Mayans thousands of years ago to be discovered and reunited in modern times.

The meaning of crystal skulls isn't the only thing up for debate; there's also a lot of mystery surrounding their history. Some think that they're thousands of years old and could have been placed by aliens, or are relics of lost civilizations like Atlantis or Lemuria. Others call them "fakes," carved within the last few hundred years and sold with phony stories so they could bring better prices at auction. The controversy dates back to the mid-1930s and continues today, despite the assertions of both New Age believers and skeptics.

In this article, we'll take a look at the stories behind the most well known crystal skulls. We'll also learn what both devotees of the supernatural and scientists have to say about their origins. Let's start with the Mitchell-Hedges skull, possibly the most discussed crystal skull of the past 70 years.