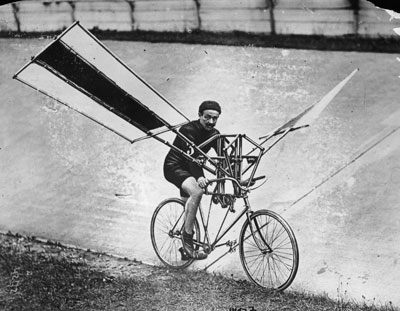 Flight Image Gallery A bicycle with wings attached to its frame for an early attempt at a flying machine, circa 1900. This, strangely enough, is a tame design. See more flight pictures.
Hirz/Getty Images

"God denied to men the faculty of flight so th­a­t they might lead a quiet and tran­quil life, for if they knew how to fly they would always be in perpetual danger."

Human history is filled with marvelous achievements. The invention of the automobile changed the landscapes of cities and the surrounding suburbs around the world; the Internet connected people on a scale unimaginable before computers; and, of course, the arrival of the airplane only 100 years ago gave us the ability to cross oceans and connect the far corners of the Earth.

Before each of these innovations settled in and were taken for granted, however, their inventors struggled to get them off the ground. Early railway systems and gas-powered vehicles were bumpy, uncomfortable and inefficient. For centuries the abacus was the only tool available for making calculations. Attempts at flight, meanwhile, were the most dangerous, since the point was maintaining control of a body or machine in the middle of the air, high above the ground.

­The history of flight, in particular, is peppered with mishaps, failures and fatalities. In ­their­ efforts to understand the mechanics of flight, would-be inventors mostly tried to mimic the anatomy of birds.­

Some of the attempts are mythical and legendary; others are true stories with real documentation. Some were simple designs destined for loud thuds; others were complicated contraptions meant for equally chaotic crashes. On the next page, we'll begin our look at some of the well-meaning failures in man's attempt to reach for the stars.