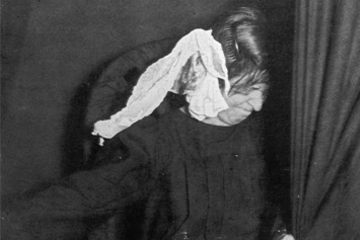 A strange visage appears on a piece of cloth next to the head of medium Marthe Beraud (aka Eva C) during a seance, circa 1910. Ectoplasm got its start in such seances.
Hulton Archive/Getty Images

To most of us, the definition of ectoplasm is "a slime in 'Ghostbusters.'" To a more select group of people, it is the outer layer of cytoplasm that helps make up an amoeba. And to an even smaller subset of the population, ectoplasm is a substance that secretes off spirits -- or their earthbound medium -- and might just help that medium produce spooky, otherworldly feats for awed witnesses.

Now. Guess which explanation for ectoplasm is actually rooted in reality? It doesn't exactly take a biologist to figure out that we should probably go for the amoeba one, as it does sound vaguely familiar -- in that high school science class kind of way. Also, ghosts aren't real.

But don't tell that to the small, yet vocal, part of our audience who chose the latter definition. Because for a long time, ectoplasm was absolutely something mysterious but not altogether insane -- if you were hanging out at séances, that is. In a séance, a medium supposedly communicates (or helps others communicate with) a spirit. During the 19th and early 20th centuries, séances were a popular fad. People were quite into the idea that souls or spirits were floating around us, waiting to be nudged with a question [source: Crystal].

Ectoplasm emerged as a nifty way for mediums to "show" people that those spirits really did exist and could physically manifest. Usually, this ectoplasm would kind of ooze from the body -- the mouth, an ear or (let's just be polite) any other orifice you could imagine. This ectoplasm sometimes looked like gauzy, cloth-like material or mysteriously took the form of faces of the spirit that was being invited to talk [source: Taylor].

Or perhaps not so mysteriously, considering that some of the most famous "physical" mediums were later found to be cutting out pictures from newspapers and using the cover of darkness (ectoplasm would supposedly disappear in light, you see) to "manifest" the stuff. Still others would just swallow some cloth or paper and spit it up for effect. A kind of gross trick, but not really from another dimension, after all [source: Taylor].

It's pretty easy to find lots of photographic "evidence" of the kind of spooky ectoplasm mediums were into. And it probably isn't a huge surprise that people took these pictures as proof; in the burgeoning days of photography, it was easy to assume that white splotches on a badly rendered picture were ghosts or that the carefully staged pictures were candid.

Lesson being, for those asking you for a definition of ectoplasm at a party, you can really judge what kinds of people they are by which definition they cleave to.

What if we ran out of fossil fuels?
Are Abnormal Archaeological Finds Proof of Extraterrestrial Life?
If you step on a rusty nail, will you really get tetanus?