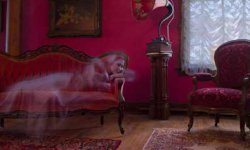 You may not see a ghost on a ghost tour, but you'll sure hear some creepy stories.
Ralph Nau/Getty Images

So it's no surprise people use vacation time to seek out the living dead. Ghost tours provide tourists the opportunity to brush shoulders with spirits, or at the least, hear a few ghostly tales. Some tourists stop in for these tours on a whim, and other enthusiasts design entire trips around visiting a string of haunted places.

The spook factor on a ghost tour depends on what you get -- a tour guide's suspenseful stories or a paranormal experience. For example, during a Charleston, S.C., ghost tour, tourists have reported blacking out in the dungeon, claiming their airflow was cut off and that ghosts breathed down their necks. On that same tour, pregnant women have reported being taunted by a female ghost who died in childbirth -- saying they've felt their babies kicking and have even experienced contractions. Several of them left the tour, and more than a few have fainted.

Recently, television shows like "A Haunting," "Ghost Hunters" and "Most Haunted" have compounded the fascination with paranormal activity. Although the latest technological advances and television trends have stirred additional interest, ghost intrigue is certainly nothing new. Ghost tales make up a large part of the mythologies of many ancient cultures, and literature has always loved a good phantom. William Shakespeare, in plays such as "Hamlet," used ghosts as plot devices to link the consequences of the past to the events of the present.

So, if you're searching for a ghost tour, where should you look? Most cities have at least one ghost tour company to guide visitors through the haunted digs. But ghost tourism seems to be most popular in areas that have been centers of historic change -- places where architecture connects us to the past and to catastrophic human suffering. Believers say ghosts can be spotted anywhere from homes to prisons to public squares. Can they? Let's take a closer look.