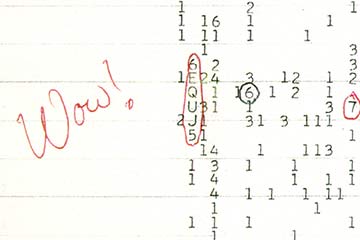 Jerry Ehman could not help scribbling 'Wow!' next to the sequence that seemed to suggest an extraterrestrial communication.
The Ohio State University Radio Observatory and the North American AstroPhysical Observatory

Thanks to NASA's Kepler mission, astronomers have identified more than 1,000 Earth-size planets in our tiny corner of the Milky Way galaxy alone [source: NASA]. Multiply those 1,000 potentially inhabitable planets by the vastness of space and time and it seems inconceivable that we are the only intelligent life forms in creation.

Are we alone in the universe? This tantalizing question is what launched the first serious scientific search for extraterrestrial intelligence (SETI) in the 1970s. In 1973, the Ohio State University Radio Observatory — known as "Big Ear" — began scanning the skies for the slightest traces of extraterrestrial transmissions, blips in the deafening silence of space [source: Kawa]. And on an August night in 1977, the first astonishing signal they received wasn't a whimper, but a roar.

Jerry Ehman was an Ohio State professor volunteering with the Big Ear SETI experiment that summer in 1977 [source: Krulwich]. Every couple of days, a bike messenger would arrive at Ehman's office with a pile of printouts generated by the telescope's mainframe computer. Ehman's thankless job was to scan the mind-numbing numbers for anomalies, anything that stood out from the constant low hum of background radiation.

On Aug. 18, 1977, Ehman was scanning readouts from three days earlier when he came across something radically different. Instead of the usual 1s and 2s and occasional 4s, there was a stream of both letters and numbers signaling a radio transmission 30 times louder than the background buzz of deep space [source: Krulwich]. Grabbing a red pen — he's a teacher, after all — Ehman circled the mysterious sequence "6EQUJ5" and excitedly scribbled next to it the single word "Wow!"

More than 35 years later, the so-called "Wow!" signal remains the "closest encounter" mankind has ever had with what may or may not be an alien species. The powerful blast of radio waves only lasted 72 seconds, but many astronomers and amateur UFOlogists believe the unique characteristics of the signal point to a celestial origin [source: Kiger]. In the three decades since that original wow moment, no one has been able to replicate the signal or identify its definitive source, cosmic or earthly.

The nearest planet that is similar in size to Earth and located within the narrow habitable zone of its star is unromantically named Kepler-186f. If there is life on this planet, none of us will ever know. That's because Kepler-186f is 493 light-years away [source: Vergano].

When the search for extraterrestrial intelligence (SETI) began in the 1960s, astronomers quickly dismissed the idea of physically visiting an alien planet. The technological advances necessary to shoot humans across the galaxy is, like the nearest habitable planet, still light-years away.

Instead, the SETI sciences decided to stay on Earth, but keep an ear on the heavens. If intelligent life is out there, SETI decided, then it must have an understanding of radio waves and the electromagnetic spectrum. Like us, the alien species probably doesn't have unlimited energy resources to travel around the universe looking for friends. The most efficient way to say, "Hello, universe. We're here!" is to send a radio transmission.

The next question for SETI scientists was where to listen? The best guess was promoted by two Cornell physicists in the early 1960s, Philip Morrison and Guiseppi Cocconi. The two men assumed that an extraterrestrial life-form intelligent enough to master the electromagnetic spectrum would try to craft its message in a "common language" that anyone could understand [source: Kiger].

The most common electromagnetic frequency, Morrison and Cocconi reasoned, is emitted by the most common element in the universe, hydrogen. If an alien was trying to communicate with us over an open channel, it would choose 1420 megahertz, also known as the "hydrogen line."

And so began the search for alien life. Using large radio telescopes, astronomers focus on one tiny patch of sky and listen for the faintest sign of an unusual transmission coming over the 1420 MHz frequency. After listening for a few minutes, the telescope moves on to the next tiny patch of sky, and so on, and so on [source: Andersen].

And that's exactly what Jerry Ehman and other SETI volunteers were doing with the Big Ear telescope at Ohio State back in the summer of 1977. They were listening to a sliver of the sky near the constellation Sagittarius and measuring the strength of the signal picked up on the 1420 MHz channel.

Ehman and others had been at it for years, always receiving the same 1s and 2s of normal background radiation, until Aug. 15, when the Big Ear picked up a startling signal that would echo through the decades.

Next we'll find out why the "Wow!" signal makes such a great case for being a message from ET.

The Case for the 'Wow!' Signal

For 72 seconds on Aug. 15, 1977, the Big Ear radio telescope picked up a signal that was 30 times as loud as the normal background noise. But what makes this signal worthy of Jerry Ehman's famous "Wow"? Why does it look to many astronomers like a message from an alien planet?

First, it has to do with the hydrogen line. The frequency of the "Wow!" signal was recorded as 1420.4556 MHz, almost exactly the electromagnetic wavelength of hydrogen [source: Krulwich]. If an alien species were to choose a single frequency to broadcast a long-range message, SETI scientists concluded, that's the one.

The second striking characteristic of the "Wow!" signal is its "shape." The shape of a radio signal describes how it would look if graphed over time.

When the "Wow!" signal was first detected by Big Ear, it registered as a 6 on the telescope's "loudness" scale. A few seconds later, it jumped to an "E" (the computer could only report single digits, so when a number exceeded 9, it switched to letters). The signal peaked at "U" (the equivalent of the number 30), then it slowly decreased back to 5. Plotting the signal on a graph, you get a nearly symmetrical pyramid shape.

Why does the signal's shape matter? Because it matches the shape you would expect from a deep space source. Here's why [source: Andersen]:

Another tantalizing characteristic of the "Wow!" signal was the sharpness of the transmission. When a radio telescope receives electromagnetic waves from a natural cosmic source, like a quasar, the radio waves are diffused over a band of frequencies.

Not the "Wow!" signal. The Big Ear telescope was listening on 50 different channels, not just 1420 MHz, and none of those other radio channels registered a blip [source: Andersen]. To many SETI scientists, this is a clear sign of an intentional radio transmission from a distant world, not an accidental cosmic event.

Next we'll hear what the skeptics say, and what we've discovered in the 35 years since we first heard the "Wow!"

If the "Wow!" signal was really a "hello" from ET, then shouldn't we respond? In 2012, to celebrate the 35th anniversary of the "Wow!" signal, National Geographic and the Arecibo Observatory in Puerto Rico beamed back a stream of digital responses collected via Twitter, including a friendly warning from comedian Stephen Colbert: "We are not delicious. In fact, we're kind of gamey and we get stuck in your teeth" [source: Space.com]. 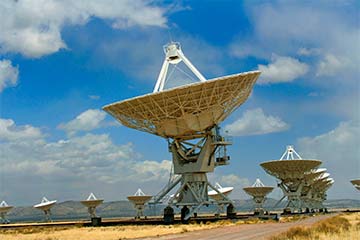 Quiz: Test Your Knowledge of These Debunked Conspiracy Theories
If Unicorns Were Real, What Would They Use Their Horns For?
In 1884, a Ship Was Discovered Totally Abandoned … and the Crew Was Never Found