What if cows didn’t exist? 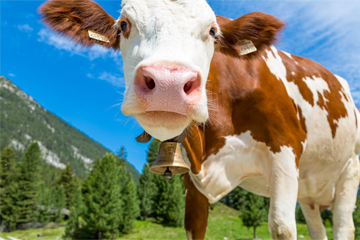 A world without cows means less methane, but it also means no beef (or fewer cute creatures if you're a vegetarian).
Hagens World/Getty Images

You'd have to go back before the dawn of recorded history to find a time when cows weren't nibbling on grass and swatting flies with their tails. Today, roughly 10,500 years after they were first domesticated from their wild oxen forebears, Earth's cows number 1.4 billion, a commodity prized for protein-rich meat and dairy [source: FAO]. So what would happen if they all vanished without a trace or even a moo?

For starters, you'd have to do without milk in your coffee or burgers on the grill — which could take some getting used to here in the U.S., since the average citizen eats more than 50 pounds of beef each year [source: USDA]. But no more cows wouldn't be the worst thing for your health if beef is always on your dinner plate: Eating a red meat heavy diet ha long been linked with Type 2 diabetes, heart disease and certain cancers, while substituting it with fish, poultry and other protein alternatives can improve health outcomes [source: NIH].

If cows didn't exist, it wouldn't necessarily be terrible for the environment either. Cows are a major contributor of methane, which accounts for as much as 10 percent of total greenhouse gas emissions in the United States and can have as much as 25 times the impact of carbon dioxide when it comes to climate change [source: EPA]. Cows also use a lot of resources that could be saved or redirected elsewhere: One quarter-pound hamburger requires about 6.7 pounds of feed, 52.8 gallons of water, 74.5 feet of square of land and 1,036 BTUs of energy to produce [source: Barclay].

However, a big bovine-shaped void isn't a panacea for the planet. While no cows would certainly mean fewer methane emissions, the energy sector remains the biggest emitter of methane in the U.S. [source: U.S. Energy Information Administration]. Shifting the resources that cows use would hardly put a dent in world hunger. According to the International Food Policy Research Institute, even if the largest and wealthiest countries slashed their meat consumption in half, the number of malnourished children around the world would only decrease by 2 percent [source: Weeks]. Valuable ecosystems wouldn't need to be cleared for pastureland, but since cows often graze in places unsuited for crop production, it wouldn't free up a ton of new acreage for different crops. It's also unclear what the economic fallout would be: In the United States, beef is an $88 billion industry [source: USDA].

And if cows didn't exist, it certainly wouldn't turn the world into a planet of vegetarians: In 2013, the average American ate almost twice as much poultry as beef [source: USDA].

What is the Plain of Jars?
13 Not 12 Constellations in the Zodiac, NASA Points Out
Scientists Prove Schrodinger's Cat Can Be in Two Places at Once