Why would scientists want to create a hybrid human-cow embryo? 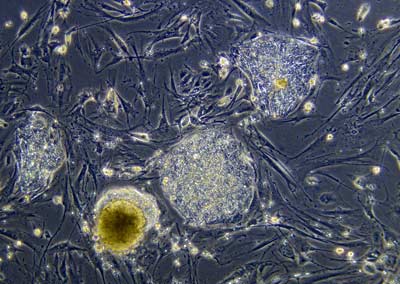 Microscopic 10x view of a colony of embryonic stems cells (The stem cell colonies are the rounded, dense masses of cells.)
Photo courtesy University of Wisconsin Board of Regents

This week, a group of London-based scientis­ts requested official permission from the UK's Human Fertilisation and Embryology Authority to begin a three-year study involving embryonic stem cells. But these aren't any old embryonic stem cells they want to investigate; these are stem cells derived from hybrid human-cow embryos. They want to create a chimera -- a single, living entity that incorporates two completely separate species in its DNA.

Stem cells ­are cells found primarily in embryos, and they have not yet taken on the characteristics of any particular type of cell, such as bone, muscle tissue or brain matter. Because stem cells are undifferentiated in this way, they have limitless potential -- they can become any kind of cell you want. Their medical value lies in the idea that if you could create stem cells that perfectly match the DNA of, say, a Parkinson's patient, then you could implant those stem cells into the Parkinson's-damaged area of the brain in order to rebuild that area and effectively cure the disease. But stem cells are a hot political topic, because researching stem cells from human embryos typically involves destroying those embryos.

­Besides the attempt to avoid the bioethical tug-of-war that is human stem-cell research, the s­cientists have a very logical reason for turning to cow eggs: In order to really study stem-cell development in a way that could lead to tangible benefits in medicine, researchers need to look at thousands and thousands of specimens, and human eggs are in short supply. Plus, women have to undergo surgery in order to donate their eggs to science, which is no small consideration. Bovine eggs, on the other hand, are as plentiful as, well, bovines, and the cows don't seem to mind donating their eggs for the betterment of mankind.

One might wonder how a human-cow hybrid could produce stem cells that scientists can study for their usefulness in fighting human diseases like Parkinson's and Alzheimer's. In reality, the stem cells that result from the process of combining a bovine egg with human DNA end up being 99.9 percent human. The process goes something like the diagram to the right.

In the case of the human-cow embryo, the "donor egg" is the cow's egg, and the "patient's cell" could be something like a skin cell. Any cell containing human DNA can be used in what is essentially a cloning technique. The nucleus of the cow egg is removed and replaced with the nucleus of the human skin cell. The resulting embryo has exactly the same DNA as the person who donated the skin cell. The only bovine elements that remain after the replacement process are outside the cell's nucleus, and the stem cells are inside the nucleus. The stem cells are entirely human. The scientists harvest the stem cells after about six days, and the rest of the embryo is discarded.

To learn more about stem-cell research and related topics, check out the links on the following page.