What if the Earth had two moons? 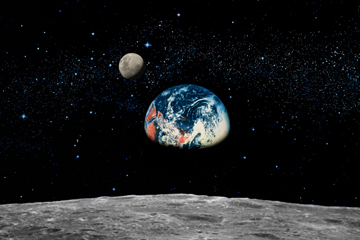 What would it be like if we had two moons? Pretty dangerous.
Ros Roberts/StockTrek/Getty Images/D.Fagan

"The tide is high, but I'm holding on" is the first line of a Blondie song from 1980 (which was actually a cover, but it considerably outsold the 1967 original). It could also be society's new theme music if the Earth suddenly found itself with two moons.

The song perfectly represents what would likely be Earth's new reality — rising and unpredictable tides — according to Neil Comins, a physics professor at the University of Maine and author of the book "What If the Earth Had Two Moons." Comins is one of only a few science types — as opposed to science-fiction types — to have addressed this question, which means there's not a lot of science-based theorizing out there for what is, really, an interesting — and potentially apocalyptic — scenario.

First, a little background: NASA scientists believe our current moon formed 4.5 billion years ago when an enormous Mars-sized body banged into us. Debris from the impact hurtled into space, began orbiting the Earth and eventually formed into the moon as we know it [source: NASA]. This is not something most of us would want to see repeated, and the gravitational effects of a second moon — even after its dramatic formation — wouldn't be any better (though we likely wouldn't be around to experience them anyway).

In his book, Comins goes a different route for the formation of Earth's second moon — one that wouldn't doom all of Earth's inhabitants to extinction. His second moon, Lluna, would be captured by our first moon long after the Earth and our current moon have settled into a working relationship with each other, with Lluna orbiting Earth on a path halfway between the Earth and the moon. But as Lluna settled into its orbit, we would experience hell on Earth. The gravitational pull of the new moon would create tides up to eight times higher than our current tides, with enormous tidal waves larger than anything we've ever seen before. The tidal waves would result in earthquakes and greater volcanic activity, which would continue for years, ultimately causing a mass extinction of marine life [source: Comins].

Once things settled, life would be very different. Light at night would be much brighter with two full moons, and we would have fewer hours of real darkness. Cities built along the water — think New York, San Francisco or even London — would erode with the tides, and buildings would be destroyed.

While Comins's book is hypothetical, some researchers theorize that the Earth already has two — or sometimes more — moons. These scientists argue that we pick up small asteroids that make several orbits around the Earth over a period of a few weeks or months before taking back off into space. They also believe that this happens over and over with no ill or positive effects, since these hitchhiker moons are so small [source: Wolchover]. And given our spot in the universe, it's not a huge stretch to speculate about having two moons. After all, Saturn and Jupiter each have more than 50, and even our closest galactic neighbor, Mars, has two [source: NASA].

So, all things considered, maybe Blondie's "The Tide is High" isn't the right theme song for the Earth having two moons. How about a chorus of Creedence Clearwater Revival's "Sweet Hitchhiker?"

What Are Skyquakes?
What's Going on With Detroit's Mysterious Zug Island?
What if there were no bees?