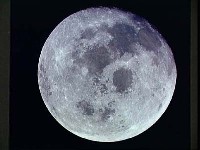 Could the moon be the solution to a future energy crisis? See more moon pictures.
2008 HowStuffWorks

If you discount all of the wars, conflicts, consumer enslavement and carbon dioxide emissions it's generated, oil has been pretty good to humanity. It's fostered our global development at warp speed pace. But oil is finite -- it's a nonrenewable resource, which means that we will eventually run out of it.

The sense that humanity is racing against the fuel-source clock makes alternative energy a front-and-center issue. Ideas like switchgrass ethanol, biodiesel and wind and solar power may soon actually power the globe. But each of these still has its own obstacles to large-scale energy production. So researchers continue to look around our planet for novel ways to power it.

Some believe we've already hit peak oil -- the point at which our supply, provided by oil rigs like this one in Azerbaijan, declines.
Wojtek Laski/Getty Images

Some researchers are looking beyond our planet to the night sky. It turns out, there's a way that we can generate electricity from the moon -- thanks to the tides created by the gravitational pull the moon exerts on Earth's oceans. The Earth is tugged by the sun and moon. The sun dwarfs the moon in size, but the moon is much closer to Earth -- around 239,000 miles away, compared to the distance of 93 million miles between the sun and the Earth. Proximity trumps size when it comes to tidal movement here on Earth: The moon exerts more than twice as much gravitational force on Earth than the sun does [source: Office of Naval Research].

Think of the water that's found on Earth as a single, rubbery covering that encapsulates the planet. When the moon pulls this covering toward it, it stretches so that it thins out and widens on each side. These are the swollen, high tides. The wrapper is stretched thinnest on the top and bottom. This is where the low tide is found. The moon's pull is constant; it's the rotation of the Earth on its axis that causes different areas to experience high and low tides.

Because there are these predictable tides on Earth, some places around the planet are being powered by tidal movement. Find out how on the next page.

More on the Moon and Electricity

For more information on the moon and electricity, check out these cool links from TreeHugger:

Luna Gaia: The Green Side of the Moon