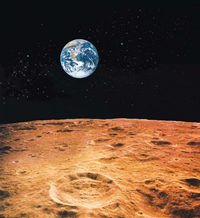 No one lives on the moon...yet.
Digital Vision/Getty Images

Anyone who grew up with the Apollo moon launches in the 1970s, along with the movie "2001: A Space Odyssey" (which premiered in 1968), was left with the impression that there would be c­olonies on the moon any day now. Given that it's now more than 30 years later and there's been no significant progress, it's safe to assume there won't be a moon colony any time soon. But it's still a tantalizing thought. Wouldn't it be cool to be able to live, vacation and work on the moon?

Let's say we did want to colonize the moon. There are some basic needs that the moon colonists would have to take care of if this were any sort of long-term living arrangement. The most basic fundamentals include:

It would be ideal to get as much of these resources as possible from the moon itself, because shipping costs to the moon are unbelievable -- something on the order of $50,000 per pound. Just one gallon of water weighs about eight pounds, so it costs $400,000 to get it to the moon! At those rates, you want to carry as little as possible to the moon and manufacture as much as you can once you get there.

Obtaining breathable air, in the form of oxygen, is fairly easy on the moon. The soil on the moon contains oxygen, which can be harvested using heat and electricity.

Water is trickier. There's now some evidence that there may be water, in the form of buried ice that has collected at the south pole of the moon. If so, water mining might be possible, and it would solve a lot of problems. Water is necessary for drinking and irrigation, and it can also be converted to hydrogen and oxygen for use as rocket fuel.

If water isn't available on the moon, it must be imported from Earth. One way to do that would be to ship liquid hydrogen from the earth to the moon, and then react it with oxygen from the moon's soil to create water. Since water molecules are 67 percent oxygen and 33 percent hydrogen by weight, this might be the cheapest way to get water to the moon. As a side-benefit, the hydrogen can react with oxygen in a fuel cell to create electricity as it creates water.