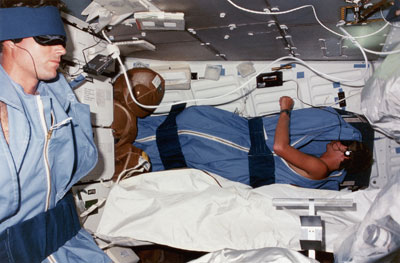 Pilot Michael L. Coats (left) and mission specialist Steven A. Hawley (right) fall asleep listening to music on the lower deck of the shuttle Discovery. What's it like for an astronaut to sleep in space? See more astronaut pictures.
Space Frontiers/Getty Images

When we settle into our beds at night, we usually experience a pleasant sense of unburdening. After a long day of walking, sitting, and standing, letting gravity do the work and sinking into a soft mattress can be a relief. But a little more than 200 miles (322 kilometers) above the Earth, astronauts live and work in zero gravity aboard the International Space Station (ISS), and going to sleep in zero gravity presents a much different situation.

The ISS is big -- it takes up about the same footprint as an American football field (including the end zones), and since launch now has more livable space than what you'd find in the average five-bedroom home, including two bathrooms, a gym (while in space, astronauts, on average, exercise for two hours every day in an effort to combat a side effect of life in space: bone and muscle loss), and a 360-degree bay window [source: NASA].

Since it docked in November 2000, the International Space Station has never been empty; in its first decade of operation more than 200 people visited the orbiting laboratory and spaceport, and it always has a permanent crew of six on board [source: NASA, Sample].

Crews on the ISS may live in space for long periods of time -- for example, Expedition 34 lived in space for 144 days -- and the details of each day they spend in space are scheduled beforehand. A typical weekday for the crew of Expedition 18 (the 18th permanent crew of the ISS), for instance, began with a 6 a.m. UTC (UTC is the same as GMT, which is used to reduce time zone confusion among countries) wake-up call, followed by 90 minutes of time for eating breakfast and getting ready for the day. By 7:30 a.m., the crew had conference calls with each country's control center, and embarked on a morning of science experiments, maintenance and small chores. Following an hour for lunch, the crew was back to work, along with more exercise much like the morning routine. With one final planning conference call with each control center, the day wrapped up around 5:30 or 6 p.m., followed by dinner at 8 p.m., and bedtime at 9:30 p.m. [source: Magnus].

After a busy day of exercising, research and maintenance work, the least an astronaut could ask for is a good night's sleep. But even the idea of "night" changes when you're in space, when an orbiter zooms around the Earth multiple times a day. And with the effects of microgravity and weightlessness, even the quality of sleep in space is different from that on Earth.

What's it like for astronauts to sleep in space? Do they just float around without anything to hold them down, or are they attached to something? Is it difficult to sleep in space, or do the effects of low gravity actually make it easier? To learn how astronauts get their Z's in zero gravity, read on.