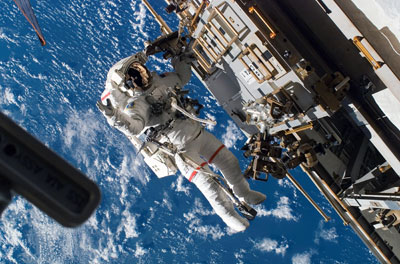 We often take for granted the very special environment in which we live. The large mass of the Earth is able to hold together a complex atmosphere of nitrogen, oxygen, carbon dioxide and water vapor over its surface so we can breathe and live comfortably, free from harmful radiation and most incoming meteoroids.

When astronauts go up into space, they have to bring a similar environment with them in order to survive -- without it, their bodies would suffer from a complete lack of air and pressure. Space shuttles and space stations are filled with the same kind of air found at sea level, and except for the effects of microgravity, crew members live and breathe quite normally. If astronauts ever have to leave the confines of a spacecraft, though, they'll have to take part in the highly specialized activity known as spacewalking.

Despite being multibillion-dollar projects, space stations and space shuttles aren't perfect. They're complex systems with lots of intricate pieces, and if something goes wrong, it could cause major damage, compromising the mission, the expensive technology and, most importantly, the people on board.

So when something needs to be repaired, removed or added and robotics just won't do the trick, specially trained astronauts have to conduct spacewalks to take care of the problem with human finesse. The events can last for very long periods of time, and, like cave diving underwater, require a great deal of training, equipment and technology to pull off safely.

So what does it take to spacewalk? What keeps a spacewalker safe in the vacuum of space? What if you have to go to the bathroom out there? To learn about spacewalks, read the next page.