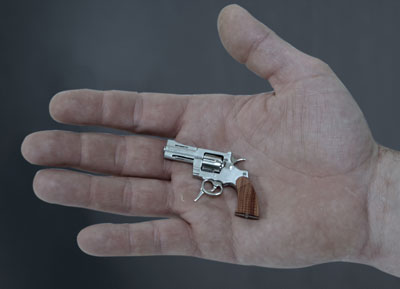 According to Guinness World Records, the title of the smallest working revolver in the world goes to the Miniature Revolver C1ST, manufactured by SwissMiniGun [source: Daily Mail]. The tiny firearm measures just more than 2 inches and weighs less than 1 ounce. It fires bullets made by SwissMiniGun that are 2.34 mm caliber, rim fire cartridges and come as either blank rounds (which don't produce a bullet) or live rounds (bulleted) [source: SwissMiniGun].

Only a very small number of the guns have been produced since they were first manufactured in 2005. They're largely collectors' items. About 300 have been made -- this tiny gun carries a big price tag. The standard steel C1ST model goes for around $6,200, and the company has been creating only 100 of them per year [source: SwissMiniGun].

There's also a customized version of the revolver -- the Nr. A1YG -- made of 18k gold. The higher-end model can be outfitted with all manner of grips, from ebony to diamonds. This version comes complete with a tiny rocket launcher attachment, which fires luminescent rockets that explode in green, white or red. The company has fetched up to almost $60,000 for a custom Nr. A1YGs [source: Daily Mail].

The novelty SwissMiniGun will likely never be mass produced. The detail that goes into each one and the high cost prohibit widespread manufacturing. But that hasn't kept concern among some law enforcement quarters from growing. The company says it can't ship its firearms to the United Kingdom, and the guns are banned in the United States. The U.S. federal gun laws outlaw any working firearm with a barrel less than 3 inches long [source: Daily Mail]. This is greater than the entire length of the SwissMiniGun.

One reason the guns are outlawed in the U.S. is due to the small size of their bullets. Firing a cartridge essentially smashes the bullet, making it impossible to trace using ballistics investigation [source: WTVJ]. The SwissMiniGun is also small enough that it fits completely in the palm of the average adult's hand, rendering it highly concealable -- its holster even has a key chain ring on the end. This makes some federal agencies nervous: U.S. laws prohibit any firearm that can't be detected at airports [source: ATF].

While Paul Erad, the owner of SwissMiniGun is complying with laws that prohibit him from selling the guns to these countries' citizens, you could say he's incredulous. In one interview he cited post-Sept. 11 "paranoia" as the reason for America's unwillingness to import the guns [source: Daily Mail]. The official SwissMiniGun site points out that some pellet guns pack as much as 10 times the wallop of the tiny revolver.

The SwissMiniGun's 2.34mm-caliber ammunition travels just under 400 feet per second. Its bullets pack a punch of about 0.71 foot pound of energy [source: SwissMiniGun]. By contrast, the Remington 300 Ultra Mag round carries 4,220 foot pounds of energy with it [source: Remington].

On the other hand, according to the United Kingdom's House of Commons, it takes at least one foot pound of force to inflict a penetrating wound, like a gunshot injury. Anything less (like the force delivered by SwissMiniGun cartridges) "is incapable of penetrating even vulnerable parts of the body, such as the eye" [source: House of Commons]. But ballistic experts claim that even when fired at close range, a projectile with less than a foot pound of force can still penetrate the skin -- especially the eye.

These statistics aren't convincing U.S. authorities to lift the ban on the SwissMiniGun, though. One airport security official told Miami's NBC 6 station, "I think anything that shoots a projectile is dangerous" [source: WTVJ].

For more information on firearms and related topics, visit the next page.