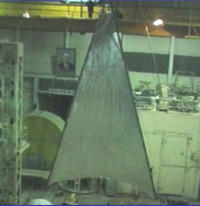 The first solar-sail spacecraft, called Cosmos-1, has been developed, built and tested by The Planetary Society, a private, non-profit organization whose goal is to encourage the exploration of our solar system. The Planetary Society contracted a Russian space organization, the Babakin Space Center, to build, launch and operate the spacecraft. The cost of the project is about $4-million and is funded by Cosmos Studios, a new science-based media company.

The spacecraft itself weighs 88 lb (40 kg) and can sit on a tabletop. After a first-phase test launch, the spacecraft will be launched into Earth orbit -- 522 mi (840 km) perigee and 528 mi (850 km) apogee. The spacecraft systems include:

Power - A small array of solar cells supplies all of the electrical power.

Communications - Redundant radio systems are used to communicate with flight controllers on the ground.

In the next section, we'll discuss the details of the Cosmos-1 mission.

The original design of the sail blade had it folded into rolls. However, some tests indicated that folding the sail blades into accordion-like structures might be more reliable, which would still be deployed by inflating the tubes.