What's the Difference Between a Satellite and Space Junk? 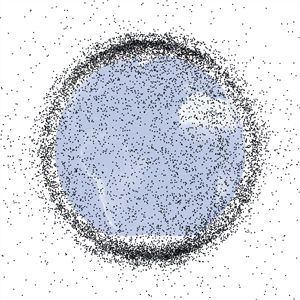 This NASA illustration represents all man-made objects, both functioning objects and debris, being tracked when the image was created in 2009. The image was made from models used to track debris in Earth orbit.
Image courtesy NASA Orbital Debris Program Office

Technically, a satellite is any object that revolves around a planet or smaller celestial body. Astronomers classify moons as natural satellites, and they have, over the years, tallied hundreds of these objects orbiting the planets and dwarf planets in our solar system. For example, they have compiled a list of 67 moons circling Jupiter.

Man-made objects, such as those launched during the Sputnik and Explorer missions, can also be classified as satellites because they, like moons, circle a planet. Unfortunately, the human activity required to get man-made satellites into space has produced an enormous amount of leftover debris. All of these bits and pieces behave just like larger rockets and spacecraft -- they move around their target planet at very high speeds, following circular or elliptical paths. In the strictest interpretation of the definition, each piece of debris qualifies as a satellite. But astronomers generally think of satellites as objects that perform a useful function. Scraps of metal and other detritus hardly count as useful and therefore fall into a different category known as orbital debris.

According to NASA's Orbital Debris program, there are 100 million pieces of orbital debris no larger than 1 centimeter (0.4 inches). There are 500,000 pieces in the 1-10 centimeter (0.4-3.9 inch) range and approximately 21,000 items larger than 10 centimeters. Astronomers sometimes refer to the stuff in the latter category as space junk -- objects large enough to track with radar that were inadvertently placed in orbit and that now pose a threat to other active, properly functioning satellites.

Orbital debris can come from many sources:

A special NASA satellite called the Long Duration Exposure Facility (LDEF) was put in orbit to study the long-term effects of collisions with space junk. The space shuttle Challenger deployed LDEF in April 1984, and the space shuttle Columbia retrieved it in January 1990. Over its nearly six-year mission, the satellite's instruments recorded more than 20,000 impacts, some of which were caused by micrometeorites, others by orbital debris [source: Martin]. NASA scientists continue to analyze the data from LDEF to learn about orbital debris populations and distributions.