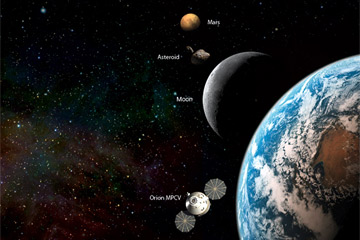 Will the SLS ever make it to the moon, Mars and more? We hope so.
Image courtesy NASA

It remains too early in the game to predict the ultimate fate of the Space Launch System (SLS), but that has not stopped some commentators and politicos from prophesying doom for the program. They argue that the SLS, like Constellation before it, will shine brightly and briefly, sucking billions from the budget before collapsing under the accumulated mass of cost overruns, poor planning and rampant political maneuvering.

The primary argument for concern revolves around the lack of a solid plan. Currently, the early SLS is slated to make near-Earth orbital flights. Later missions have been vaguely described as targeting asteroids, Mars missions and "deep space" exploration; details, however, remain sketchy, and no explicit plans have been set out for fulfilling these disparate mission profiles. Nor is there a blueprint for how to connect them in a logical series of research and developmental steps.

Critics have further argued that the design specifications remain in such a state of flux that they endanger the mission timetable. The requirement of reusing shuttle engines and boosters, for example, means that initial SLS missions will require shuttlelike conditions, structures, equipment and designs for launch, which could conflict with the launch conditions required for later missions, implemented after the shuttle program spares run out and are replaced by newer designs.

In other words, early progress in the program could be in the wrong direction.

Then there are the missions. Although some balk at having to spend tens of millions of dollars per seat for American astronauts to "hitch a ride with the Russians" to the International Space Station (ISS), particularly in light of recent launch problems, the SLS might not be a better alternative [source: Simberg, "3 Questions"; Simberg, "NASA's Space"]. Commercial companies developing near-Earth orbital craft capable of servicing the ISS are well under way; NASA helps fund their development. Critics point out that, once active, these ships will run several times a year, whereas the SLS is predicted to launch once or twice annually, if that. Indeed, on Sept. 13, 2011, Rep. Dana Rohrabacher of California directed NASA to assess an alternative plan to the SLS, one involving parking a fuel depot in orbit to support commercial rockets.

With near-Earth missions in limbo, that leaves the SLS to carry out missions to asteroids or Mars, both prospects with iffy long-term political backing. Even assuming the program can survive the long years and political wrangling necessary to bring such missions to fruition, the question still remains: Would such projects have been better served by a more focused program -- or programs?

With too many cooks, fickle congressional and administration support, and no actual missions currently planned or funded, can NASA pull off the Space Launch System? If not, can the American space program withstand another false start? Only time will tell.

For now, it's comforting for space enthusiasts to know that the continuity of 40-plus years of astronautical engineering know-how will not be lost and that America has not entirely abjured its role in space.