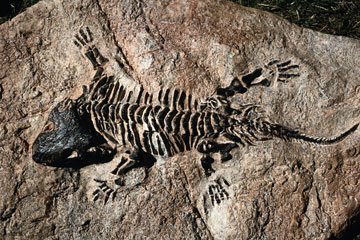 Systematic biologists cultivate a unique orchard. Following in the footsteps of Charles Darwin, they grow phylogenetic trees -- branching diagrams that depict lines of evolutionary descent back to a common ancestor.

Also known as phylogenies, these assemblies of lines and classifications chart biodiversity with varying specificity, from individual organisms to broader taxonomic rankings such as kingdoms and domains. With each tree, these biologists come closer to uncovering something even greater: a four-dimensional model of life itself.

Scientists use a number of tools to reconstruct the tree of life. They depend heavily on cladistics, a method of hypothesizing relationships among organisms. Think of it as creating a family tree with blank spaces for unknown ancestors. They also turn to molecular sequencing in which they reveal the hierarchy of relationships among different organisms by comparing their molecular details. Think of a family tree again, only this time using DNA evidence to figure out what goes where on the chart. And of course, there's the fossil record: the mineralized remnants of past life forms imprisoned in the Earth itself.

The fossil record, however, is quite incomplete. Here's one major reason why: Sediment has to cover an organism's remains in order for the long fossilization process to begin. Most organisms decompose before this can happen. Fossilization odds increase if the organism happened to exist in large numbers or lived in or around sediment. For example, trilobites, ancient marine arthropods, met both criteria, so they're rather common fossils. The Tyrannosaurus rex, however, is far rarer. It was large and land-dwelling, and as a top predator made up a far smaller percentage of the population.

Plus, fossils may be set in stone, but they're far from impervious. Like all rocks, they erode, melt and fragment. Factor in all the fossils we haven't uncovered with the ones we can't decipher properly (due to partial fossilization or insufficient technology), and the fossil record gets even spottier.

So like the mineralized bones themselves, the fossil record is an incomplete framework that scientists flesh out through additional methods. While cladistics, molecular sequencing and the fossil record all present different data sets, systematic biologists generally find similar patterns of diversification in all three. In other words, the three methods complement each other and paint a congruous picture of what the tree of life should look like.

The fossil record grows more incomplete the further back in time we attempt to look. Organisms that are more recent don't appear either. For example, freshwater mollusks of the class Bivalvia suffer up to 45 percent incompletion in some subclasses [source: Valentine et al.]. Important links in the fossil record also remain unaccounted for, such as the ancient last common ancestors connecting entire phyla. Research into the fossilization process continues to illuminate just how much of the record we're missing.

So, taken on its own, the fossil record is considerably lacking in many areas. Yet like fingerprints at a crime scene, it's just one piece of the puzzle. Fossils, cladistic and molecular sequencing work together to form a larger picture that   correctly documents the evolution of life [source: Benton et al.].

Explore the links on the next page to learn even more about fossils and evolution.

How the Ancient Land Blob Gondwana Became Today's Continents
Earth Is in a New Epoch Because of Humans, Scientists Say
Scientists Crack Another Mystery Behind Blood Falls