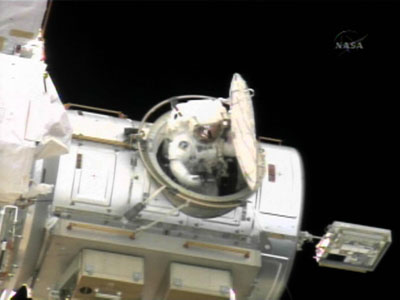 The process leading up to a spacewalk takes almost an entire day, and it's not because of the many items that make up an astronaut's suit. The main reason for this is because astronauts need time to go through decompression, the same procedure cave divers use when returning from the depths of the ocean to the surface of the water.

To allow maximum mobility and maximum protection from the lack of pressure in space, a space suit is pressurized at 29.6 kilopascals during a spacewalk, about one third of the pressure experienced by the crew inside the spacecraft. Astronauts also have to breathe in pure oxygen, because the amount of oxygen in air at such a low pressure isn't enough.

Now, if an astronaut simply donned a space suit in 15 minutes and promptly exited an airlock, he or she would go through decompression sickness, or "the bends" -- the same thing scuba divers experience if they're exposed to a rapid drop in external pressure by ascending too quickly. The bends causes expanded nitrogen gas bubbles in the bloodstream to escape too quickly, and joint pain, dizziness, cramps, paralysis and even death can follow.

The airlock of the International Space Station.
2008 HowStuffWorks

To avoid this, the entire cabin undergoes decompression from the normal 101 kilopascals to 70.3 kilopascals and a slight increase in oxygen at least 24 hours before the spacewalk begins. One hour before a spacewalk, astronauts wear a mask and prebreathe pure oxygen, which will prepare them for breathing 100 percent oxygen.

The majority of this takes place inside an airlock. The airlock is a small cylindrical area, only 5.25 feet (1.6 meters) in diameter and 6.9 feet (2.1 meters) high, located on a spacecraft's mid-deck. A hatch from the mid-deck leads to the airlock, and the airlock is connected by another hatch to an unpressurized payload bay, which leads to outer space. After an astronaut dons the full space suit inside the airlock and shuts himself off completely from the outside atmosphere, the inner hatch of the airlock is sealed and the pressure inside is gradually decreased. Once the area reaches the appropriate pressure, the astronaut pulls himself through the outer airlock hatch into the payload bay and finally begins the EVA.

To learn about what it's like to work in space, read the next page.