Extravehicular Activity and the Dangers of Space 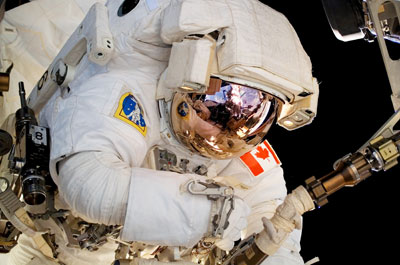 If astronaut Dave Williams didn't have his space suit on while making repairs to the International Space Station, much of his body would experience significant, dangerous swelling.
NASA/Getty Images

Although spacewalk is the common name most people use, there's actually an official term: extravehicular activity (EVA). An EVA can actually have several definitions, and it all depends on the country performing the spacewalk. The Russians, for example, define an EVA as any time a cosmonaut spends time in a vacuum in a space suit. Russian and Soviet spacecraft have specialized airlocks for spacewalks; even though a cosmonaut might not be completely out of the ship, he or she is still under the protection of a space suit. The American definition, on the other hand, has at least the astronaut's head outside of the spacecraft.

Either way, an EVA happens when an astronaut leaves the protective environment of a spacecraft and enters outer space, the area that lies outside of the Earth's atmosphere. The void of space is commonly referred to as a vacuum, which means there's a near or total lack of gas molecules. The gravitational attraction of the planets and stars pulls most gas toward them, leaving the areas in between practically empty.

Luckily for us, things are much more hospitable on Earth. The atmosphere, mainly a mixture of nitrogen, oxygen and hydrogen gases, exerts a pressure on our bodies that we're used to -- about 101 kilopascals at sea level.

In space, however, there's a complete lack of molecules, which means there's also a complete lack of pressure. This is one of the major reasons it's dangerous for astronauts to go into space without a proper space suit. If you were to exit a spacecraft just wearing jeans and a T-shirt, the air inside your lungs would quickly rush out of your body because of the lack of air pressure. Gases in body fluids would expand, pushing your insides around in grisly ways, and your skin would inflate like a balloon.

There are several other hazards that come with venturing out into space unprotected. Temperatures outside of a spacecraft fluctuate wildly depending on where you are. Sunlit objects above the Earth's atmosphere can reach more than 248 degrees Fahrenheit (120 degrees Celsius), while shaded ones can reach the opposite extreme -- lower than negative 212 degrees F (100 degrees C). On top of this, the radiation from the sun, ultraviolet radiation and tiny meteoroids speeding through space pose potential dangers.

Fortunately, a space suit keeps astronauts alive in the vacuum of space while providing enough mobility to move around and accomplish tasks. To learn about the space suit an astronaut uses for spacewalks, read the next page.

The first human in history to conduct a spacewalk was Aleksei Leonov of Russia, during the Voskhod II program. After launching into orbit on March 18, 1965, Leonov exited the spacecraft and took part in extravehicular activity for about 12 minutes. The historic event almost ended in disaster, though, when his space suit inflated while he was outside and prevented him from re-entering the airlock. Opening a valve and risking decompression sickness -- or "the bends," the illness divers experience after surfacing too quickly -- Leonov released as much air from the suit as possible and made his way back inside.

The first American to spacewalk was Edward White during the Gemini 4 mission on June 3, 1965. White tested a Hand-Held Maneuvering Unit, a small jet held by astronauts to propel them around during spacewalks.