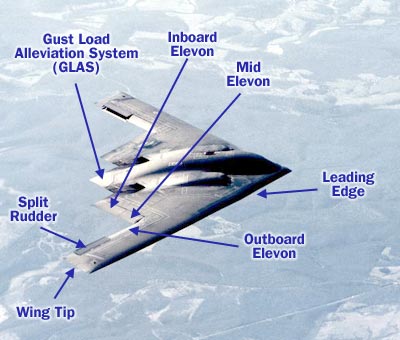 The B-2 has four General Electric F-118-GE-100 jet engines, each of which generates 17,300 pounds of thrust. Just as in an ordinary plane, the pilot steers the B-2 by moving various parts of the wings. As you can see in the diagram below, the B-2 has elevons and rudders along the trailing edge of the plane. Just like the elevators and ailerons on a conventional plane, the elevons change the plane's pitch (up and down movement) and roll (rotation along the horizontal axis). The elevons and rudders also control the plane's yaw (rotation along the vertical axis).

Flying wings have been around for a long time, but in the past, they suffered from major stability problems. Without the rear stabilizers, the plane tends to rotate around its yaw axis unexpectedly. The U.S. military didn't go for Northrop Grumman's earlier flying wing designs from the 1940s mainly because of these concerns.

By the 1980s, advancements in computer technology made the flying wing a more viable option. Northrup Grumman built the B-2 with a sophisticated fly-by-wire system. Instead of adjusting the flaps through mechanical means, the pilot passes commands on to a computer, which adjusts the flaps. In other words, the pilot controls the computer and the computer controls the steering system.

Run your cursor over the text to locate the plane's major components.

The computer also does a lot of work independent of the pilot's input. It constantly monitors gyroscopic sensors to keep track of the plane's attitude -- its position relative to the airflow. If the plane starts to turn unexpectedly, the computer automatically moves the rudders to counteract the turning force. The corrections are so precise that the pilot usually won't feel any shift at all. The B-2 also has a small wedge-shaped flap in the middle of the trailing edge. The computer adjusts this flap, called the gust load alleviation system (GLAS), to counteract air turbulence forces.

The Crew and Support

The B-2 bomber needs only a two-person crew -- a pilot and a mission commander who sit in a cockpit at the front of the plane. By comparison, the B-52 bomber has a five-person crew, and the B-1B has a four-person crew.

The original idea of the B-2 was that it wouldn't need any support aircraft. Because of its stealth capabilities, it should be able to penetrate enemy airspace without fire support, doing the work of dozens of planes. In practice, the B-2 usually flies with some fighter jet protection. The risk of losing such an expensive aircraft is too great to send it into battle solo.