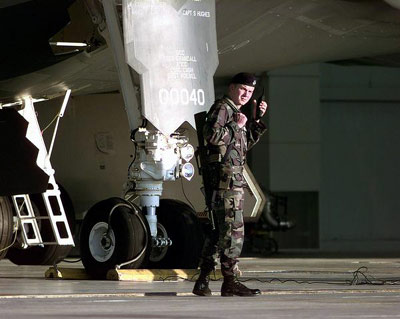 The B-2 has two major defenses against radar detection. The first element is the plane's radar-absorbent surface. The radio waves used in radar are electromagnetic energy, just like light waves. In the same way that certain materials absorb light very well (black paint, for example), some materials are particularly good at absorbing radio waves.

The B-2's body is mainly composed of composite material -- combinations of various lightweight substances. The composite material used in the B-2 bomber is specifically designed to absorb radio energy with optimum efficiency. Parts of the B-2, such as the leading edge, are also covered in advanced radio-absorbent paint and tape. These materials are very expensive, and the Air Force has to reapply them regularly. After every flight, repair crews have to spend many hours examining the B-2 to make sure it's fit for stealth missions.

Highly reflective metal components, such as the plane's engines, are all housed inside the composite body. Air flows into the intake ports, though an S-shaped duct and down to the engines. The bombs are also mounted inside the plane, and the landing gear fully retracts after take-off.

The second element in radar invisibility is the plane's shape. Radio waves bounce off planes in the same way light bounces off a mirror. A flat, vertical mirror will bounce your image straight back to you -- you'll see yourself. But if you tilt the mirror 45 degrees, it will reflect your image straight upward. You won't see yourself; you'll see an image of the ceiling. A curved mirror also deflects light at an angle. If you were to aim a laser pointer at a curved mirror, the laser beam would never bounce straight back to the pointer, no matter how you positioned it.

The stealth bomber's peculiar shape deflects radio beams in both ways. The large flat areas on the top and bottom of the plane are just like tilted mirrors. These flat areas will deflect most radio beams away from the station, presuming the station isn't directly beneath the plane.

The plane itself also works like a curved mirror, particularly in the front section. The entire plane has no sharp, angled edges -- every surface is curved in order to deflect radio waves. The curves are designed to bounce almost all radio waves away at an angle.

The B-2 is designed to contain its own radio signals, the electromagnetic energy generated by onboard electronics. The plane does emit radio energy when using its radar scanner or communicating with ground forces and other aircraft, but the radar signal is small and highly focused, making it less susceptible to detection.

When the B-2 project began, the U.S. Air Force planned to buy 132 planes at a total cost of $22 billion. By the time the aircraft was unveiled in 1988, the price tag had jumped to more than $70 billion. Many members of congress weren't pleased with the expenditure, or with the more than $20 billion the Pentagon had already spent developing the plane.

By the time the Soviet Union collapsed in 1991, the price had jumped even higher and the need for a huge fleet of B-2s had decreased. In 1993, Congress authorized the Pentagon to buy 20 B-2s at around $2 billion a piece. A few years later, President Clinton authorized the military to upgrade the original prototype B-2 to a working weapon, bringing the total to 21. Many feel the plane isn't worth the high price tag and maintenance costs, especially since the older, cheaper B-52 and B-1 bombers can carry more bombs at faster speeds. There are no plans to add more B-2s to the fleet at this time.