Watt and the Steam Engine 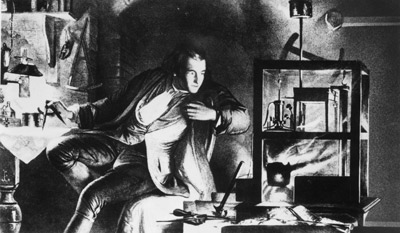 While the Newcomen Engine and Savery's "Miner's Friend" certainly employed steam technology, today's steam engine is generally credited to the work of one man: James Watt.

Trained as an instrument maker in London, Watt eventually found employment near Glasgow University in Scotland. When one of the University's Newcomen Engines needed repairs, Watt found himself elbow-deep in the inner workings of steam technology. Watt soon recognized a basic design flaw: Time, steam and fuel were wasted by having both heating and cooling take place inside the piston cylinder.

Watt solved the problem by creating the separate condenser. He added a chamber separate from the cylinder (which he also insulated), where steam would be cooled to create the necessary vacuum. This separation allowed the piston cylinder to remain the same temperature as the entering steam with no energy wasted heating it and the water inside. Additionally, the separate condenser could be kept at a much lower temperature and required less cooling.

After partnering with Matthew Boulton, Watt was able to produce a faster, more fuel-efficient engine using the separate condenser. The pair's attempt to find new uses for their successful engine led to two more crucial inventions -- the double-acting engine and the fly-ball governor.

The fly-ball governor created an automated method of opening and shutting steam valves to a piston. Sun and planet gear were fixed to a wheel-driven shaft. As steam power caused the rod to spin, the two balls spun outward from the shaft. When they reached their highest point, they caused the steam valve to shut. As their spinning slowed, they spun back toward the rod and caused the valve to open again. This transformed the motion in the steam engine from back and forth -- reciprocating motion -- into the circular motion required to operate a wheel.

The double-acting engine helped make the steam engine more efficient by harnessing the power of formerly idle steam to push down pistons.

In the next section, we'll look at the Cornish Engine: the next step in steam engine technology.