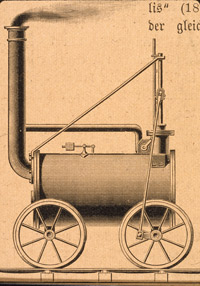 Inventors were working on designs for steam-powered cars even as the first steam pumps were fine-tuned in the late 1600s. While some believe Ferdinand Verbiest created a working steam car in 1672, more evidence suggests French inventor Nicolas-Joseph Cugnot made the first steam-powered vehicle in 1769. But while the research and development of steam-powered cars continued for some time, the idea was most successful in the form of the rail-mounted steam locomotive.

The man behind the Cornish Engine, Richard Trevithick, was also a key individual in the development of the steam locomotive. It's important to note that train tracks already existed in the 1770s in various industrial areas of England. Iron-enforced wooden rails called tramways had been built for horses to pull carts of coal. In 1804, Trevithick unveiled a steam-powered engine capable of hauling 10 tons of iron for 10 miles. In 1808, Trevithick's Portable Steam Engine was displayed on a circular track in central London.

Another British engineer, George Stephenson, picked up two decades later where Trevithick left off. Stephenson's work in developing increasingly efficient steam engines for transporting coal led to the decision to create a rail link between Durham coalfields and a shipping port in Stockton. Stephenson suggested that the plan also permit the engines to carry passengers. In 1825, Stephenson conducted Locomotion No. 1 on its first journey -- carrying cargo and an estimated 600 passengers.

While the development of steam cars remained a mere scientific curiosity for the next 100 years, the steam-powered locomotive took off. The engine operated on a system of wheels rotated by a steam-driven piston. Engineers worked continuously to improve the system by increasing steam pressure, applying compounding and adding additional wheels.

The railway proved a vital part of the­ Industrial Revolution, changing the way in which cargo was transported across land and tying together distant populations. Steam powered the railways until diesel engines and electric power came to the forefront in the 20th century.

In the next section, we'll look at how steam technology changed the seas.