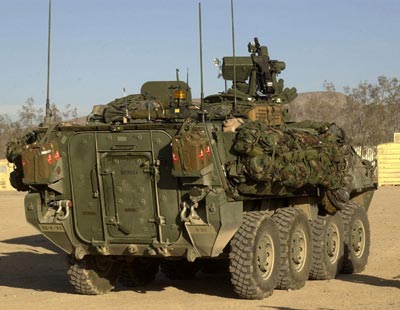 Let's begin with the elements common to all Stryker configurations. Starting at ground level, the most obvious innovation over earlier light and medium vehicles are the wheels. The Stryker moves on eight wheels, as opposed to the tracks usually found on a tank, heavy truck or armored personnel carrier. A wheeled vehicle is generally much faster than one on tracks, but tracks are capable of traveling on a wider variety of surfaces. So, in keeping with the "best of both worlds" approach of the Stryker project, its tires are built with a new technology that makes them almost as versatile as tracks.

The Eaton/Dana Corporation created a special pressure-control system (CTIS, or Central Tire Inflation System) for the Stryker's eight tires, so that they can be inflated or deflated at will from within the vehicle. This means the Stryker crew can adapt the chassis height and gripping power of the wheels on the fly, giving it much more mobility than a vehicle with fixed tire pressure. A control panel (ECU) in the dashboard is hooked up to sensors and pressurized hoses attached to each tire. This allows the crew to monitor precise tire pressure and make changes with the push of a button. With a top speed of over 60 mph (97 kph), the Stryker is faster than a tank. But thanks to CTIS, like a tank it can travel over both hard and soft surfaces. CTIS also helps to make the Stryker portable. By partially deflating the tires, the Stryker crew can make it more compact for shipment on cargo planes.

The tires are supported by a hydropneumatic, nitrogen-charged, independent suspension system. This works in tandem with the CTIS to create a smooth ride at various heights from the ground.

The Stryker's selectable four-wheel or all-wheel drive is powered by a 350-horsepower, automatic-transmission, Caterpillar turbodiesel engine with a two-speed transfer case. It has six forward speeds and the ability to travel in reverse. Top speed is approximately 65 mph (105 kph), and it can travel 330 miles (531 km) on a 53-gallon tank of diesel fuel. The engine generates 580 lb-ft of torque at 1,400 rpm. It can carry up to 6,500 pounds (2,950 kg) of cargo and generates enough power to tow an additional 10,000 pounds (4,536 kg).

Since this is the same engine found in the Army's medium class vehicles, the Stryker can share repair parts and service personnel with those older units. This is another feature that makes Stryker brigades more efficient and compact.

can be found on other military vehicle systems, including the Humvee, and in commercial heavy trucks. If you simply have to have it for yourself, it's also an option on high-end consumer SUVs like Hummer's H1.