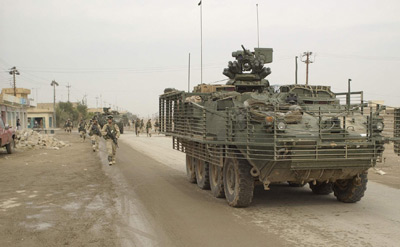 For armor, the Stryker starts with a 0.5-inch (1.27-cm) thick layer of steel lined in Kevlar. On top of this, the Stryker has a layer of ceramic tile armor, and then some outer areas are also fitted with 3-millimeter plates for reinforcement. Combined, these layers protect the vehicle and its crew from firepower up to a 14.5-mm heavy machine gun throughout the entire vehicle and up to 152-mm high-explosive airbursts from above.

These technologies are designed to ready the Stryker for battles with light-armored trucks and vehicles and small arms fired by foot soldiers, but they are not sufficient shielding from a missile-like rocket-propelled grenade (RPG). As part of the Stryker project, the consortium is designing a special tile that will defend against RPGs, but that technology is still in development. Because of the prevalence of RPGs in the Iraq conflict, each Stryker sent to Iraq was fitted with a thick steel cage, known as slat armor, around its entire surface. Designed something like a catcher's mask, the cage is designed to stop RPGs before they make it to the surface of the Stryker, causing them to detonate before they get close enough to damage the armor plates.

Several other features help keep the Stryker and its crew safe from harm. Its tires are "run-flat." They contain hard-rubber inner tubes that allow the Stryker to keep moving even if the tires burst. The Stryker also has a self-recovery system, which is a heavy-duty winch that can pull it out if it gets stuck in deep trenches or ruts.

Additionally, Kidde Aerospace developed a fire-suppression system for the vehicle, which automatically dispenses fire-extinguishing chemicals if it senses a fire in the troop compartment or in the engine. The system is made up of a central control system hooked up to five to seven tanks that contain the fire-fighting chemicals. Each tank is fitted with a pressure-sensitive switch that sits in front of a bellows with a plunger running through it. The oxygen-burning action of a fire causes a change in air pressure, and that triggers the switch. As the switch moves, it causes the bellows to extend, moving the plunger and releasing the chemicals from the tanks. The system can also be activated or placed in standby mode through the Stryker's control console.

Finally, the Stryker has four M6 smoke grenade launchers, which allow it to virtually disappear to the naked eye behind a curtain of smoke.

The Stryker is controlled by two crew members: a driver and a vehicle commander. The driver's seat is just below the hatch. The driver can do all of his or her work inside the sealed vehicle, thanks to three M-17 periscopes and a Driver's Vision Enhancer (DVE) system. Also found on M1A2 Abrams tanks, the DVE is a heat-sensing computer video system that allows the driver to see clearly through darkness, haze and dust. The driver steers with a steering wheel and shifts with a lever very much like that of a car. Technologies like power-assisted steering, anti-lock brakes and the hydropneumatic suspension make the Stryker drive something like a very large and very powerful automobile.

Inside a Stryker Spc. James Buzzard of the 14th Cavalry drives a Stryker vehicle away from the USNS Sisler during offloading operations at the Port of Kuwait.
Photo courtesy U.S. Army, by Spc. Bill Putnam

The vehicle commander has an array of high-tech systems to help survey the battlefield and plan maneuvers. The commander monitors seven M45 periscopes, a video camera and a thermal imaging system. Perhaps most impressive, adjacent to the commander's seat is a computer terminal hooked up to the FBCB2 (Force XXI Battle Command, Brigade-and-Below) communications system. This is a maximum-security data and communications network that links all of the vehicles on the battlefield and the information they gather in real-time, including reconnaissance drones and eavesdropping systems. Not only does it provide each FBCB2-equipped vehicle with the most current and accurate map of friendly and enemy troop locations, but it also allows Army officers throughout the world to monitor events as if they were on the scene.

Those are the elements common to all vehicles in the Stryker project. Now let's look at what makes each type of Stryker unique.

Critics of the Stryker, including military analysts, congresspeople and combat veterans, have argued that the project has not met its objectives and may never fulfill the ambitious ideals of the Army Transformation Plan (see the later section Mission: Vehicle for the New Army for details). Discussion has focused on three main problem areas: