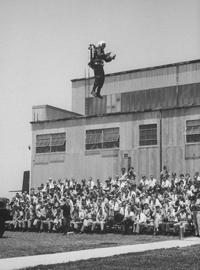 T­he U.S. Army began researching rocket pack technology in 1949 at Redstone Arsenal in Alabama. The Ordnance Rocket Center at Redstone was the agency in charge of the program. Their goal was a back-mounted device that could propel a single soldier into the air. In 1952, Thomas Moore successfully tested a rocket pack which lifted him into the air, but only for a few seconds. A device called the Jumpbelt was demonstrated at Fort Benning, Ga., in 1958 with a slightly greater flight time. News footage of these demonstrations fueled the public's interest in jet packs. The project was then shifted to Bell Aerosystems in Buffalo, N.Y.

Bell developed something they called the Rocket Belt, though the official name was the Small Rocket Lift Device (SRLD). Over the course of the next decade, Bell's Rocket Belt made several improvements in speed and flight time, reaching speeds up to 10 mph. Plans for a jet-powered version, which did achieve longer flight times in initial tests, were scrapped when the military decided it didn't fit the design parameters because it was too large and heavy

At that point, serious industrial development of jet pack technology came to a halt. Virtually all jet packs developed ever since have been created by amateur inventors or independent companies, and they're used primarily for public demonstrations at thrill show events or for stunt scenes in movies. A prime example of this is Rocketman. There isn't actually a single person known as Rocketman, rather it's a franchise that operates worldwide giving demonstrations of a rocket belt based on the Bell Aerosystems model. Rocketman can be hired for publicity work and movie stunt work, including custom advertising and special performances [source: The Rocketman].

How much horsepower is developed by a rocket belt, and how much can it actually lift? You may be stunned by the answer. Find out on the next page, where we provide you with a few of the more interesting rocket belt technical details.

Yves Rossy acquired the nickname The Rocketman from the media (he is not associated with the Rocketman company). A Swiss pilot and engineer, Rossy created one of the few actual jet packs in the world. His winged flight suit uses four jet engines (not rockets). He deploys from a plane and freefalls briefly before firing the engines and soaring at close to 200 mph. He controls his direction by shifting his body, banking the wings to turn. The preliminary flight in May of 2008 was a success -- Rossy was aloft long enough to turn a series of aerobatic maneuvers before coming to a safe landing with a parachute [sou­rce: Daily Mail Online]. ­

­Rossy's jet pack has an eight-foot wingspan and cost over $200,000 to develop. He does not intend to market it commercially or to the military, but he does plan additional test flights