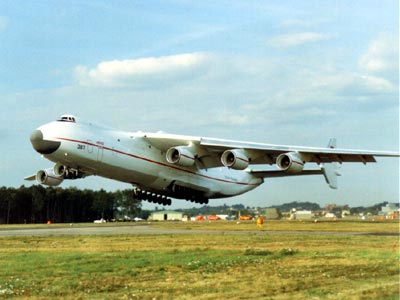 The Antonov AN-225 is the world's largest cargo plane.
Photo courtesy Nick Challoner

The world's biggest transport plane is the Antonov AN-225. With a cargo capacity of over 250 tons, this plane can haul not just one, but three or four military tanks.

This plane was originally designed to carry the Russian version of the space shuttle. Plans for the shuttle were put on hold, and the plane has been grounded since the early 1990s. The plane was recently restored, and it made its first test flight on May 7, 2001. Its wingspan is almost the length of a football field, and its cargo hold can fit 80 cars.

Now we've seen planes that haul everything from the postcard you sent your grandmother to battle tanks. You really can ship anything!