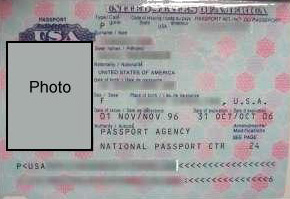 The photo-identification page of a U.S. passport

One of the most important security measures at an airport is confirming the identity of travelers. This is done by checking a photo ID, such as a driver's license. If you are traveling internationally, you need to present your passport.

Simply taking a look at a photo ID isn't enough, however. The high-tech buzzword in airport security today is biometrics. Biometrics essentially means checking fingerprints, retinal scans, and facial patterns using complex computer systems to determine if someone is who they say they are - or if they match a list of people the government has determined might be potential terrorists.

A new system called CAPPS II could help accomplish some of this. Short for Computer Assisted Passenger Prescreening System, CAPPS II will require more personal information from travelers when they book their flights, which will lead to a risk assessment of no risk, unknown risk, elevated risk, or high risk. Passengers considered risky will be further screened. Although the system has been delayed and isn't in place yet, the Department of Homeland Security (DHS) predicts that CAPPS II will make check-in faster for the average traveler.

You may have noticed the public address system at an airport replaying an automated message telling you not to leave your bags unattended. And you've probably noticed that check-in attendants are asking some questions that sound a little odd:

These are very important questions. A tactic used on occasion by terrorists is to hide a bomb inside an unsuspecting person's luggage. Another tactic is to give something, maybe a toy or stuffed animal, to someone who is about to board a plane. That innocent-seeming object may actually be a bomb or other harmful device.

While the TSA deals with all forms of transportation, the Federal Aviation Administration (FAA) is devoted entirely to the operation of the U.S.'s civil aviation. FAA agents are located at every major airport for immediate response to possible threats. Most major airports also have an entire police force, just like a small town, monitoring all facets of the facility. Background checks are required on all airport personnel, from baggage handlers to security-team members, before they can be employed. All airport personnel have photo-ID cards with their name, position and access privileges clearly labeled.