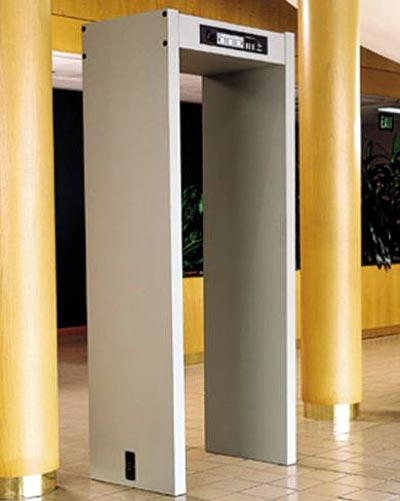 All public access to an airport is channeled through the terminal, where every person must walk through a metal detector and all items must go through an X-ray machine.

Almost all airport metal detectors are based on pulse induction (PI). Typical PI systems use a coil of wire on one side of the arch as the transmitter and receiver. This technology sends powerful, short bursts (pulses) of current through the coil of wire. Each pulse generates a brief magnetic field. When the pulse ends, the magnetic field reverses polarity and collapses very suddenly, resulting in a sharp electrical spike. This spike lasts a few microseconds (millionths of a second) and causes another current to run through the coil. This subsequent current is called the reflected pulse and lasts only about 30 microseconds. Another pulse is then sent and the process repeats. A typical PI-based metal detector sends about 100 pulses per second, but the number can vary greatly based on the manufacturer and model, ranging from about 25 pulses per second to over 1,000.

A demonstration of PI technology

The sampling circuit sends the tiny, weak signals that it monitors to a device call an integrator. The integrator reads the signals from the sampling circuit, amplifying and converting them to direct current (DC).The DC's voltage is connected to an audio circuit, where it is changed into a tone that the metal detector uses to indicate that a target object has been found. If an item is found, you are asked to remove any metal objects from your person and step through again. If the metal detector continues to indicate the presence of metal, the attendant uses a handheld detector, based on the same PI technology, to isolate the cause.

Many of the newer metal detectors on the market are multi-zone. This means that they have multiple transmit and receive coils, each one at a different height. Basically, it's like having several metal detectors in a single unit.

In the next section, we'll discuss what happens to your carry-on items while you're going through the metal detector.