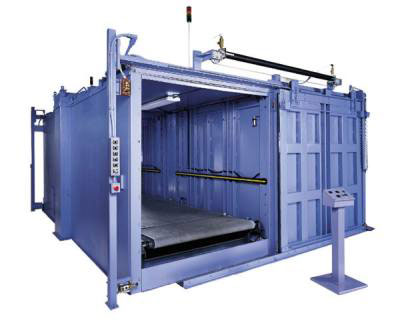 In addition to passenger baggage, most planes carry enormous amounts of cargo. All of this cargo has to be checked before it is loaded.

Most airports use one of three systems to do this:

In some airports, medium X-ray facilities are set up to scan an entire pallet of luggage at a time.
Photo courtesy L-3 Communications

One old-fashioned method of bomb detection still works as well or better than most hi-tech systems -- the use of trained dogs. These special dogs, called K-9 units, have been trained to sniff out the specific odors emitted by chemicals that are used to make bombs, as well the odors of other items such as drugs. Incredibly fast and accurate, a K-9 barks at a suspicious bag or package, alerting the human companion that this item needs to be investigated.

In addition to an X-ray system, many airports also use larger scanners. Let's take a look at those next.