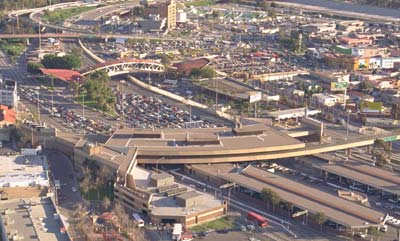 Customs monitors the movement of goods across the San Ysidro border between California and Mexico. This border crossing is the busiest crossing point in the United States.
Photo courtesy U.S. Customs Service, photographer James R. Tourtellotte

A nation's customs service has many responsibilities. At its most basic level, its purpose is to regulate what comes into and goes out of a country. The foremost element of this regulation is controlling international trade. The concept of trade is as old as civilization itself. If my tribe has a huge supply of bananas, and your tribe has a huge supply of fur, we will trade goods so that both our tribes can eat and both can keep warm. In the modern world, international trade is based on money, but it works in pretty much the same way. My country may produce more televisions than the population needs, but not enough cars. In order to have everything the population needs, businesses in my country will export TVs (sell them to people in other countries) and import cars (buy them from other countries).

Any nation wants its own businesses to do well, so most of the time they prefer their people buy domestic goods over competing foreign goods. But in many cases, goods are available cheaper in another country than in your country, and people naturally want to buy them at the lower price. To tilt the balance in favor of domestic businesses, governments impose tariffs, also called duty, on foreign goods coming into the country.

In addition to encouraging domestic trade, duty also gives the nation a "piece of the action" when somebody buys something produced overseas. Customs agencies are often major sources of revenue for the government. The U.S. Customs Service, for example, brings in more money than any other government office except the Internal Revenue Service. To control specific sorts of trade, a government may impose a higher tariff on certain types of goods (alcohol, for example). Certain countries may join together to work out mutually beneficial trade agreements, enabling businesses in those nations to trade more freely with each other than they can with businesses in other nations. This gives an advantage to nations that a country has a good relationship with.

Customs agencies also monitor what is being exported from a country. For example, most governments strictly regulate what weapons can be exported to other nations. This is simply a common-sense safety measure: It's not a good idea to arm enemy nations, so the government has to know who is buying any domestically-produced weaponry. As we'll see later on, customs agencies also pay careful attention to how much money citizens are transporting out of the country.

Duty charges have a huge effect on big businesses, which may import millions of dollars worth of goods every year. To regulate trade on this level, a country's customs agency must keep track of all shipments that come into the nation's ports or cross its borders. They can't check every bit of foreign cargo, of course, so agents pick certain boxes to inspect and certain shipments to scrutinize. In an effort to speed up the process, the U.S. Customs Service is implementing new, computerized systems for processing shipments and charging importers.

While large businesses are the main importers in a country, trade restrictions also apply to the individual traveler.

When you bring home souvenirs from another country, you are actually importing goods. In the United States and many other countries, the customs agency grants each traveller a nominal duty exemption to allow them to bring back a reasonable amount of goods without having to pay tariffs. To learn more about these allowances, check out How the U.S. Customs Service Works.

In most countries, it isn't feasible for the customs agency to check all of the goods that every single traveller is importing, so governments have to depend largely on people's honesty. When you enter a country, you are asked to truthfully report what goods you are importing and make a good faith estimate of their value. They don't put their entire trust in people's good character, of course; customs performs a thorough search of some percentage of all travelers.

Some customs agencies decide which travellers to search based on random chance. You are asked to press a button on a machine that activates a random number generator. Depending on the number that comes up, either a green light comes on and you can pass through or a red light comes on and the agent searches your bags. Other customs agencies decide who to search based solely on intuition. After many years on the job, a customs agent develops a keen eye for people who are up to no good. Unlike the police, customs agents are fully authorized to search your luggage, clothes and even your body without any warrant or reason for suspicion. Customs agents often work side-by-side with immigration officials, and in some ports of entry, one inspector may represent both agencies. But at its core, a customs agency is concerned with the things that are coming in and out of a country, rather than the travelers themselves.

In addition to monitoring legal imports, a nation's customs agency also works to keep out illegal or contraband items. In the next section, we'll see why citizens are not allowed to import certain goods and find out what customs agents do to enforce these laws.

In airports, boat ports and other entryways into a country, you may find duty-free shops. These stores are special exceptions to a country's customs regulations: They are licensed to import goods into the country without paying duty on them. Since they're not paying duty, they can sell the goods at a lower price, which is a good deal for travelers.

The duty exemption only applies to the importer, not to the customer. If you are coming home and buy a bottle of wine at the duty-free shop in your own country, you won't have to pay any duty -- you weren't the one who imported the wine. But if you buy the wine at a duty-free shop in the country you were visiting, the standard duty applies when you return home with it. Items purchased in a duty-free shop are treated just like any other goods once they leave the store. To find out more about duty-free shops, check out How the U.S. Customs Service Works.