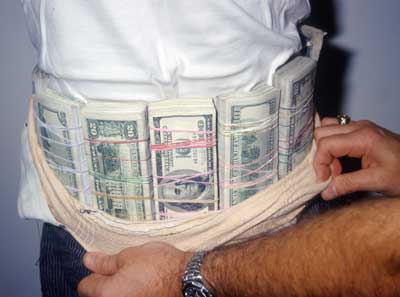 In the last section, we looked at some of the ways customs agencies fight the flow of illegal materials across borders. In addition to drugs, customs agencies may watch for weaponry, child pornography, counterfeit merchandise and stolen goods. They also watch for people carrying illegally gained money across borders. Criminals will try to smuggle money from country to country in an effort to launder it (deposit or invest it in legitimate forms, concealing its true source). In some countries, customs agents are more concerned with people exporting money than importing money. Criminals will take ill-gotten cash to a country with less-vigilant law enforcement, where they can use it freely.

These sorts of illegal materials make up only one category of contraband goods. Customs agents also stop the importation of legal goods that are a threat to the nation's security. In most countries, the importation of fruits, meats, animals and plants is heavily regulated due to the fear of disease or ecological imbalance. While it may seem strange that a piece of fruit is considered a threat to national security, the risk of biological contamination is very real. In the late 1980s, one traveler with one piece of contaminated fruit caused an infestation of Mediterranean fruit flies that destroyed millions of dollars worth of crops in California. Customs agencies test food imports, and if the samples do not meet the governments standards, the goods are destroyed or turned away from the port. When animals are brought into the country, they may be put in quarantine for long-term observation.

Some completely harmless items are deemed contraband simply because of the country they come from. If country A is considered to be a national enemy of country B, or has a record of violating international law, country B (and other countries) might institute an embargo against that country (a ban on the importation of country A's goods). This cuts off potential business for country A, and this may persuade its leaders to change their policies. In the United States, the best known example of this sort of sanction is the embargo against Cuban products. There is a high demand for Cuban cigars in the United States, but they are strictly regulated because of the strained relationship between the United States and Cuba. As with drugs, smugglers are eager to sneak in a supply to meet this demand, and are constantly trying to get around customs.

In 1994, this valuable, 1,000-year-old Chinese sculpture was stolen from the Five Dynasties tomb of Wang Chuzhi. In spring of 2001, U.S. Customs officers identified it in a Christie's auction catalogue and returned it to the Chinese government.
Photo courtesy U.S. Customs Service, photographer James R. Tourtellotte

In many countries, the customs agency closely monitors the importing and exporting of cultural artifacts. While a traveler may have purchased the item in good faith, it might have been stolen at an earlier point. Customs agencies have helped to restore many priceless artifacts to their rightful owners.

A country's government might also ban importation of items based on ethics and morality. For example, in many countries, you cannot import ivory or other products that come from endangered animals. In 2000, the United States enacted the Dog and Cat Protection Act, banning the importation of any products made from dog and cat fur that was acquired inhumanely. The U.S. Customs Service confiscates all such goods so that U.S. citizens do not inadvertently support this practice.

Without customs agencies, nations would have no control over what comes in and goes out of their country. In order to protect its citizens and businesses, a government has to be vigilant in protecting its borders, not only against armed attack, but also against unwanted imports. As any customs agent will tell you, this is crucial to maintaining order in modern society.

For more information on customs and related topics, check out the links below.