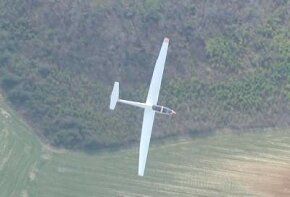 In its simplest form, a glider is an unpowered aircraft, an airplane without a motor. While many of the same design, aerodynamic and piloting factors that apply to powered airplanes also apply to gliders, that lack of a motor changes a lot about how gliders work. Gliders are amazing and graceful machines, and are about as close as humans can get to soaring like birds.

If you enjoy aviation sports, then you should check out the paragliding article, video and images at Discovery’s Fearless Planet to learn more.

From paper airplanes to the space shuttle during re-entry, there are many types of gl­iders. In this article, we will focus on the most common type of glider, often referred to as a sailplane.

Special thanks to the North Carolina Soaring Association for their help with this article.
Contents

Parts of a Glider 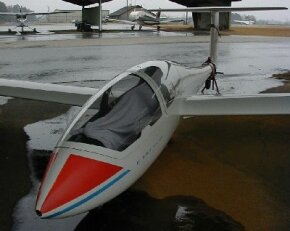 A glider has many of the same parts as an airplane:

But, there are significant differences in these parts on a glider, so let's take a look at each.

Gliders are as small and light as possible. Since there is no large engine taking up space, gliders are basically sized around the cargo they carry, usually one or two people. The cockpit of a single-seat glider is small, but it is large enough for most people to squeeze into. Instead of sitting upright, pilots recline with their legs stretched out in front of them. The frontal exposure of the pilot is reduced and the cross-sectional area of the cockpit can be substantially smaller.

Gliders, along with most other aircraft, are designed to have skins that are as smooth as possible to allow the plane to slip more easily through the air. Early gliders were constructed from wood covered with canvas. Later versions were constructed from aluminum with structural aluminum skins that were much smoother. However, the rivets and seams required by aluminum skins produce additional drag, which tends to decrease performance. In many modern gliders, composite construction using materials such as fiberglass and carbon fiber are quickly replacing aluminum. Composite materials allow aircraft designers to create seamless and rivet-less structures with shapes that produce less drag.

If you look at a glider next to a conventional powered plane, you'll notice a significant difference in the wings. While the wings of both are similar in general shape and function, those on gliders are longer and narrower than those on conventional aircraft. The slenderness of a wing is expressed as the aspect ratio, which is calculated by dividing the square of the span of the wing by the area of the wing.

Glider wings have very high aspect ratios -- their span is very long compared to their width. This is because drag created during the production of lift (known as induced drag) can account for a significant portion of the total drag on a glider. One way to increase the efficiency of a wing is to increase its aspect ratio. Glider wings are very long and thin, which makes them efficient. They produce less drag for the amount of lift they generate.

The aspect ratio of a wing is the wingspan squared divided by the area of the wing. The glider has a much larger aspect ratio than a conventional plane.

Why don't all planes have wings with high aspect ratios? There are two reasons for this. The first is that not all aircraft are designed for efficient flight. Military fighters, for example, are designed with speed and maneuverability well ahead of efficiency on the designer's list of priorities. Another reason is that there are limits to how long and skinny a wing can get before it is no longer able to carry the required loads.

Mouse-over the control names to see where they're located on the glider.

Inside a typical glider cockpit, you'll find the following:

Getting off the Ground

Since the glider's wings generate more lift, it takes off before the tow plane.

Without an engine, a glider's first problem is getting off the ground and up to altitude. The most common launching method is an aero-tow. A conventional powered plane tows the glider up into the sky using a long rope. The glider pilot controls a quick-release mechanism located in the glider's nose and releases the rope at the desired altitude. Right after release, the glider and the tow plane turn in opposite directions and the glider begins its unpowered flight. The tow plane is then free to return to the airport and set up for another tow.

Another popular launching method is winch launching. An engine powers a large winch on the ground and a long cable connects the winch to another release mechanism located on the underside of the glider. When the winch is activated, the glider is pulled along the ground toward the winch and takes off, climbing rapidly. As the glider rises, the pilot can release the winch line as in an aero-tow and continue his flight.

Staying in the Air 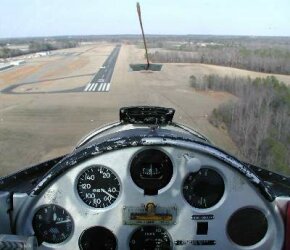 The way you measure the performance of a glider is by its glide ratio. This ratio tells you how much horizontal distance a glider can travel compared to the altitude it has to drop. Modern gliders can have glide ratios better than 60:1. This means they can glide for 60 miles if they start at an altitude of one mile. For comparison, a commercial jetliner might have glide ratios somewhere around 17:1.

If the glide ratio were the only factor involved, gliders would not be able to stay in the air nearly as long as they do. So how do they do it?

The key to staying in the air for longer periods of time is to get some help from Mother Nature whenever possible. While a glider will slowly descend with respect to the air around it, what if the air around it was moving upward faster than the glider was descending? It's kind of like trying to paddle a kayak upstream; even though you may be cutting through the water at a respectable pace, you're not really making any progress with respect to the riverbank. The same thing works with gliders. If you are descending at one meter per second, but the air around the plane is rising at two meters per second, you're actually gaining altitude.

There are three main types of rising air used by glider pilots to increase flight times:

Thermals are columns of rising air created by the heating of the Earth's surface. As the air near the ground is heated by the sun, it expands and rises. Pilots keep an eye out for terrain that absorbs the morning sun more rapidly than surrounding areas. These areas, such as asphalt parking lots, dark plowed fields and rocky terrain, are a great way to find thermal columns. Pilots also keep a look out for newly forming cumulus clouds, or even large birds soaring without flapping their wings, which can also be signs of thermal activity.

Once a thermal is located, pilots will turn back and circle within the column until they reach their desired altitude at which time they will exit and resume their flight. To prevent confusion, gliders all circle in the same direction within thermals. The first glider in the thermal gets to decide the direction -- all the other gliders that join the thermal must circle in that direction.

Ridge lift is created by winds blowing against mountains, hills or other ridges. As the air reaches the mountain, it is redirected upward and forms a band of lift along the windward side of the slope. Ridge lift typically reaches no higher than a few hundred feet higher than the terrain that creates it. What ridge lift lacks in height however, it makes up for in length; gliders have been known to fly for a thousand miles along mountain chains using mostly ridge lift and wave lift.

Wave lift is similar to ridge lift in that it is created when wind meets a mountain. Wave lift, however, is created on the leeward side of the peak by winds passing over the mountain instead of up one side. Wave lift can be identified by the unique cloud formations produced. Wave lift can reach thousands of feet high and gliders can reach altitudes of more than 35,000 feet.

The glider is yawing when it is not pointing exactly in the direction it is flying (relative to the air around it). Instead the glider is angled sideways and is "slipping" or "skidding" through the air. The string on the windshield indicates whether the glider is flying straight (string straight) or whether it is yawing (string left or right). The glider produces the least drag when it flies straight through the air. When it is yawing, the drag increases -- so in general, glider pilots try to keep the string straight.

A plane's lift, drag and glide ratio characteristics are governed solely by its construction, and are predetermined at takeoff. Without thrust, the only other characteristic that the pilot has control over (besides normal control surfaces) is the weight of the plane.

A heavier glider will sink faster that a light glider. The glide ratio is not affected by weight because while a heavier glider will sink faster, it will do so at a higher airspeed. The plane will come down faster, but will cover the same distance (at a higher speed) as a lighter glider with the same glide ratio and starting altitude. In order to help them fly faster, some gliders have tanks that can hold up to 500 pounds of water. Higher speeds are desirable for cross-country flying.

The downsides of heavier sailplanes include reduced climb rates in a lifting environment (such as a thermal) and, possibly, shorter flight duration if suitable lift cannot be located. To prevent this, the water ballast can be jettisoned at any time through dump valves, allowing the pilots to reduce the weight of the plane to increase climb rates, or to reduce speed as they come in for a landing.

Note the raised spoiler on the wing during landing

Landing a glider is much like landing a conventional plane, except there is usually a single small wheel located directly under the pilot. The wings on gliders are very strong, and the tips are reinforced to prevent damage in case they scrape along the ground during a landing. Even so, pilots can usually manage to keep both wing tips off the ground until the plane has slowed sufficiently (kind of like riding a fast bike down the runway). Glider tails typically have a tiny wheel that prevents the tail from scraping while on the ground.

When landing the glider, the pilot needs to be able to control the glide path (the rate of descent relative to distance traveled) in order to bring the glider down in the right location. The pilot has to be able to reduce the amount of lift produced by the wings without changing the speed or attitude of the glider. He does this by deploying spoilers on each wing. The spoilers disrupt the airflow over the wing, drastically reducing the lift it produces and also increasing the drag.

On July 23, 1983, a brand new Air Canada Boeing 767 was forced to glide to a landing after running out of fuel in midair. The plane essentially became an enormous glider. Even descending at a paltry glide ratio of about 11:1, the pilots managed to land safely at an abandoned airport in Gimli, Canada. The story of why the plane ran out of fuel is a long one, but it was partly due to an error in confusing English units with metric units.

If you are interested in learning more about this incident, you can read more by searching the Web for "Gimli glider" or by clicking here.