Parts of a Glider 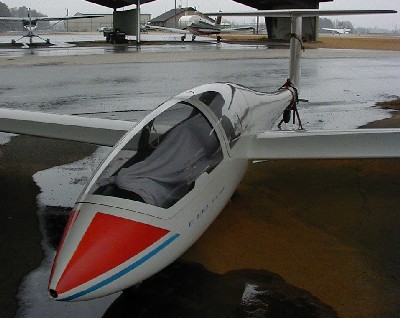 A glider has many of the same parts as an airplane:

But, there are significant differences in these parts on a glider, so let's take a look at each.

Gliders are as small and light as possible. Since there is no large engine taking up space, gliders are basically sized around the cargo they carry, usually one or two people. The cockpit of a single-seat glider is small, but it is large enough for most people to squeeze into. Instead of sitting upright, pilots recline with their legs stretched out in front of them. The frontal exposure of the pilot is reduced and the cross-sectional area of the cockpit can be substantially smaller.

Gliders, along with most other aircraft, are designed to have skins that are as smooth as possible to allow the plane to slip more easily through the air. Early gliders were constructed from wood covered with canvas. Later versions were constructed from aluminum with structural aluminum skins that were much smoother. However, the rivets and seams required by aluminum skins produce additional drag, which tends to decrease performance. In many modern gliders, composite construction using materials such as fiberglass and carbon fiber are quickly replacing aluminum. Composite materials allow aircraft designers to create seamless and rivet-less structures with shapes that produce less drag.

If you look at a glider next to a conventional powered plane, you'll notice a significant difference in the wings. While the wings of both are similar in general shape and function, those on gliders are longer and narrower than those on conventional aircraft. The slenderness of a wing is expressed as the aspect ratio, which is calculated by dividing the square of the span of the wing by the area of the wing.

Glider wings have very high aspect ratios -- their span is very long compared to their width. This is because drag created during the production of lift (known as induced drag) can account for a significant portion of the total drag on a glider. One way to increase the efficiency of a wing is to increase its aspect ratio. Glider wings are very long and thin, which makes them efficient. They produce less drag for the amount of lift they generate.

The aspect ratio of a wing is the wingspan squared divided by the area of the wing. The glider has a much larger aspect ratio than a conventional plane.

Why don't all planes have wings with high aspect ratios? There are two reasons for this. The first is that not all aircraft are designed for efficient flight. Military fighters, for example, are designed with speed and maneuverability well ahead of efficiency on the designer's list of priorities. Another reason is that there are limits to how long and skinny a wing can get before it is no longer able to carry the required loads.

Mouse-over the control names to see where they're located on the glider.

Inside a typical glider cockpit, you'll find the following: