Treasures of the Unclaimed Baggage Center 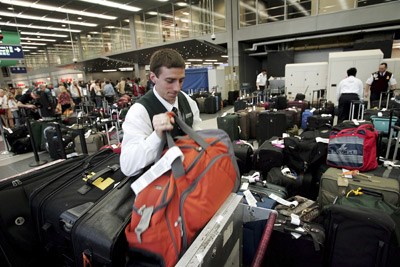 To avoid losing your luggage, label your bags inside and out.
Scott Olson/Getty Images

When a lost suitcase or backpack arrives at the Unclaimed Baggage Center, employees remove all clothing for laundering and search every zippered pocket and corner crevice for treasures. Their diligence pays: In addition to Egyptian artifacts from 1500 B.C. (which included a shrunken head), employees have uncovered a 40.95 carat emerald, a 5.8 carat diamond and a Muppet from the movie "Labyrinth."

Some items are so valuable and unusual, you might wonder what happened to the person who lost them. The Unclaimed Baggage Center has returned an F-16 guidance system to the U.S. Navy and a space shuttle camera to NASA.

While the store keeps its stranger finds in a small museum, most items sell for 50-80 percent below retail value. The constantly changing stock makes the Unclaimed Baggage Center one of Alabama's major tourist destinations. The store donates what it can't sell -- giving clothing to the homeless and baby strollers to teen pregnancy centers.

Customers certainly get a good deal at the Unclaimed Baggage Center, but how much do airlines make from selling lost luggage? Although the store and carriers keep their negotiations private, the bargain prices suggest airlines receive very little. And, in fact, they start at a loss. Passengers with mishandled luggage on a domestic flight can file claims reports and receive up to $3,000 from the airline responsible. Do not, however, expect to receive the full amount. Airlines sometimes ask for receipts to back up claims and may refuse liability if you checked in late. The Montreal Convention determines liability for international trips originating in the United States or in other ratifying countries. The Convention limits liability to 1,000 "Special Drawing Rights," an international reserve asset that fluctuates based on several currencies.

To learn more about unclaimed luggage, baggage handling and airlines, carry on to the next page.

How To Keep Your Luggage Out of Scottsboro