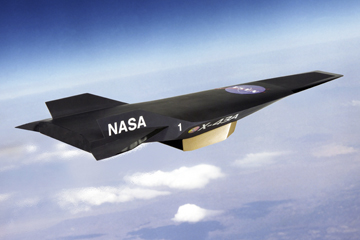 An artist's conception of the X-43A Hypersonic Experimental Vehicle, or "Hyper-X" in flight.
NASA

If you've happened to see a drone whizzing around your local park on a weekend afternoon or come across the ominous online video footage of a swarm of nanoquadrotors flying in unison, speed probably isn't the first thing that comes to mind when talking about unmanned aerial vehicles (UAVs). Instead, it's probably something like "I wonder who actually flies those things?" or "when, exactly, do the machines intend to take over the world?"

The rise of hobbyist-type quadcopter drones – named for the four sets of propellers that keep them air bound – has quickly opened new doors to how UAVs might be used. From mapping construction sites to aiding a search and rescue mission in a natural disaster area, the opportunities for employing smaller drones seem endless. As drone's capacities continue to rapidly enhance, so too does their ability to get from point A to point B.

The drone family isn't just limited to quadcopters. High-end UAVs are essentially unmanned planes, some of which are currently being used for covert military and surveillance operations. Governments and tech companies are pouring all kinds of research and development time and money into these drones, and the payoff is nothing short of spectacular. Take, for example, the X-43A, an unmanned hypersonic aircraft that's billed as the fastest flying machine on the planet [source: NASA].

Developed by the U.S. National Aeronautics and Space Administration, the X-43A has been setting and breaking its own Guinness World Records marks for aircraft speed continually since 2005, when it reached a whopping 7,000 mph (11,265 kph). For those of you scoffing at home, that's more than eight times faster than the speed of sound. Unlike an ordinary jet engine, which uses fans to compress air, the scramjet-powered X-43A allows supersonic airflow through the engine's combustion chamber as the aircraft moves forward [sources: Dorminey, Aero Time].

Although the X-43A is technically unmanned, it needs a little help getting into the air in the first place. NASA uses a "drop launch" method in which a bigger plane lifts the aircraft into the sky and then sort of plops it into the wild blue yonder. A booster rocket helps the X-43A reach optimal altitude and speed before the scramjet engine kicks in [source: Aero Time].

Miniature drones may not be nearing the speed of sound back here closer to the ground, but they are getting much quicker in leaps and bounds. The X PlusOne is a fixed-wing drone capable of flying at up to 60 mph (100 kph). It takes off and lands vertically, like your run-of-the-mill quadcopter, but is shaped like a miniature plane and also has the ability to cruise forward at high speed. Its pace is more precise than the type of hovering usually seen in other small UAVs. The drones, which cost more than $1,500 for a do-it-yourself kit, are aimed at hobbyists with a need for speed. They can also be equipped with a camera for high-speed fly-by video shots [source: XCraft].