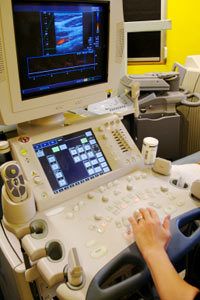 A basic ultrasound machine has the following parts:

­The transducer probe is th­e main part of the ultrasound machine. The transducer probe makes the sound waves and receives the echoes. It is, so to speak, the mouth and ears of the ultrasound machine. The transducer probe generates and receives sound waves using a principle called the piezoelectric (pressure electricity) effect, which was discovered by Pierre and Jacques Curie in 1880. In the probe, there are one or more quartz crystals called piezoelectric crystals. When an electric current is applied to these crystals, they change shape rapidly. The rapid shape changes, or vibrations, of the crystals produce sound waves that travel outward. Conversely, when sound or pressure waves hit the crystals, they emit electrical currents. Therefore, the same crystals can be used to send and receive sound waves. The probe also has a sound absorbing substance to eliminate back reflections from the probe itself, and an acoustic lens to help focus the emitted sound waves.

Transducer probes come in many shapes and sizes, as shown in the photo above. The shape of the probe determines its field of view, and the frequency of emitted sound waves determines how deep the sound waves penetrate and the resolution of the image. Transducer probes may contain one or more crystal elements; in multiple-element probes, each crystal has its own circuit. Multiple-element probes have the advantage that the ultrasounc beam can be "steered" by changing the timing in which each element gets pulsed; steering the beam is especially important for cardiac ultrasound (see Basic Principles of Ultrasound for details on transducers). In addition to probes that can be moved across the surface of the body, some probes are designed to be inserted through various­ openings of the body (vagina, rectum, esophagus) so that they can get closer to the organ being examined (uterus, prostate gland, stomach); getting closer to the organ can allow for more detailed views.

The parts of an ultrasound machine

The CPU is the brain of the ultrasound machine. The CPU is basically a computer that contains the microprocessor, memory, amplifiers and power supplies for the microprocessor and transducer probe. The CPU sends electrical currents to the transducer probe to emit sound waves, and also receives the electrical pulses from the probes that were created from the returning echoes. The CPU does all of the calculations involved in processing the data. Once the raw data are processed, the CPU forms the image on the monitor. The CPU can also store the processed data and/or image on disk.

­ The transducer pulse controls allow the operator, called the ultrasonographer, to set and change the frequency and duration of the ultrasound pulses, as well as the scan mode of the machine. The commands from the operator are translated into changing electric currents that are applied to the piezoelectric crystals in the transducer probe.­