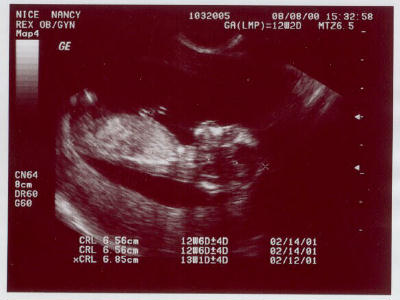 Ultrasound image of a growing fetus (approximately 12 weeks old) inside a mother's uterus. This is a side view of the baby, showing (right to left) the head, neck, torso and legs.
Photo courtesy Karim and Nancy Nice­

In ultrasound, the following events happen:

In a typical ultrasound, millions of pulses and echoes are sent and received each second. The probe can be moved along the surface of the body and angled to obtain various views.