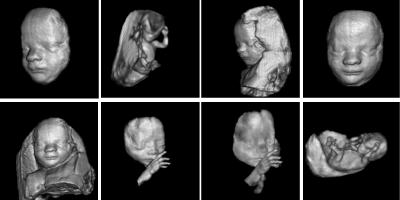 ­The ultrasound that we ha­ve described so far presents a two-dimensional image, or "slice," of a three-dimensional object (fetus, organ). Two other types of ultras­ound are currently in use, 3-D ultrasound imaging and Doppler ultrasound.

In the past several years, ultrasound machines capable of three-dimensional imaging have been developed. In these machines, several two-dimensional images are acquired by moving the probes across the body surface or rotating inserted probes. The two-dimensional scans are then combined by specialized computer software to form 3-D images.

3-D imaging allows you to get a better look at the organ being examined and is best used for: