During the Middle Ages, philosophers attempted to transmute base materials into gold in a process called alchemy. While their efforts proved fruitless, the pseudoscience alchemy paved the way to the real science of chemistry. Through chemistry, we learned more about the world around us, including the fact that all matter is composed of atoms. The types of atoms and the way those atoms join together determines a substance's properties.

Nanotechnology is a multidisciplinary science that looks at how we can manipulate matter at the molecular and atomic level. To do this, we must work on the nanoscale -- a scale so small that we can't see it with a light microscope. In fact, one nanometer is just one-billionth of a meter in size. Atoms are smaller still. It's difficult to quantify an atom's size -- they don't tend to hold a particular shape. But in general, a typical atom is about one-tenth of a nanometer in diameter.

But the nanoscale is where it's at. That's because it's the scale of molecules. By manipulating molecules, we can make all sorts of interesting materials. But like the alchemists of old, we wouldn't make much headway in creating gold. That's because gold is a basic element -- you can't break it down into a simpler form.

We could make other interesting substances, though. By manipulating molecules to form in particular shapes, we can build materials with amazing properties. One example is a carbon nanotube. To create a carbon nanotube, you start with a sheet of graphite molecules, which you roll up into a tube. The orientation of the molecules determines the nanotube's properties. For example, you could end up with a conductor or a semiconductor. Rolled the right way, the carbon nanotube will be hundreds of times stronger than steel but only one-sixth the weight [source: NASA].

Because the science deals with the basic building blocks of matter, there are countless applications. Some seem almost mundane -- nanoparticles of zinc oxide in sunblock allow you to spread a transparent lotion on your skin and remain protected. Others sound like science fiction -- doctors are attempting to use the protein casings from viruses to deliver minute amounts of drugs to treat cancer. As we learn more about how molecules work and how to manipulate them, we'll change the world. The biggest revelations will come from the smallest of sources.

Learn more about nanotechnology by following the links on the next page.

Could We Build Our Own Gundams?
Statcheck: When Bots 'Correct' Academics
How LED Incapacitators Work 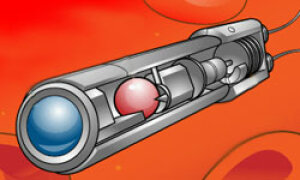 How Nanorobots Will Work