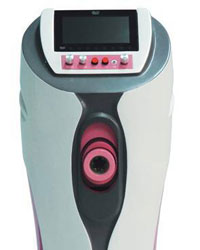 Like a Dalek, only without the death ray.
Image courtesy Sanwe Medical Equipment Co,.Ltd.

Granted, most sperm donors manage to produce their specimens via good old-fashioned manual stimulation. For most males, you could say the act comes rather naturally. But if that doesn't work, there's always the sperm collector robot from China's Sanwe Medical Group.

This lovely pink-and-white robot is designed for "semen collection and premature ejaculation desensitization training," and carries out both tasks via a throbbing "sperm-collecting barrel" [source: Sanwe]. The patient merely inserts his penis into the machine, which simulates the human vagina while providing sexually arousing sights and sounds on a built-in LCD screen. The resulting ejaculate then flows into a semen-collection sheath.

This bot debuted at China's International Medical Equipment Fair in Shenzhen back in 2011, but hasn't quite taken the world by storm just yet. Give her time.

I can see this is awkward for you. Let's keep moving.