Where It's Dark as a Dungeon 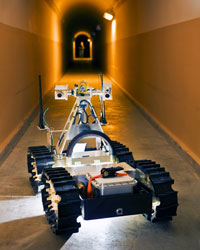 Sure, they may look like souped-up, mud-caked four-wheelers, but these bad boys are certified mine explorers. See, mines -- especially abandoned mines -- are dangerous and dirty places, prone to cave-ins and bursts of searing, poisonous gases. Whether mapping the tunnels or searching for survivors, a rugged machine is often the best option for the job.

Groundhog is the eldest of the trio, developed by Carnegie Mellon University's Robotics Institute to navigate unmapped mines with lasers. It successfully demonstrated these skills in 2003 by plunging into Pennsylvania's abandoned Mathies mine. The same researchers followed up on this success in 2007 with Cave Crawler, a smaller unit capable of autonomously exploring subterranean depths and testing for dangerous gases without a single tether to the surface world.

Then in 2011, Sandia National Labs unveiled Gemini-Scout, which could navigate sand pits, rubble piles, 45-degree climbs and depths of up to 18 inches (46 centimeters) of water in a lightless mine [source: Dillow]. Armored casings protect its electronics from explosions and prevent its circuitry from igniting flammable gases. It can even carry food and oxygen tanks to trapped miners.

The developers hope to send old Scout here to help during mine disasters around the world. To give first-time users a leg up on the technology, they've even based the bot's control system on the standard Xbox 360 remote.