by Nicholas Gerbis
Prev NEXT
4

Putting 79 Spacecraft in Orbit -- and Counting 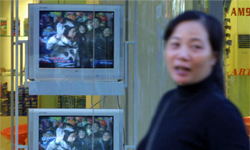 Business as usual in Beijing as a woman walks past a television announcing that China had successfully put a man in space.
Natalie Behring-Chisholm/Getty Images

In 2012, China's space technology stands at roughly the same level as that of the United States and the Soviet Union in the mid-1960s: The country has established an effective satellite launch capability and has placed a handful of humans into space. The Chinese have even conducted spacewalks.

Assuming its booming bubble-economy doesn't burst anytime soon, the Eastern power is just getting started. China has an established record of setting and meeting modest, achievable goals in its space program and, unlike its predecessors, can build upon advances in rocketry and available technology.

According to China's space agency, between 2006 and 2011, the nation achieved 67 successful launches and placed 79 spacecraft into orbit, including satellites for Earth observation, communication, navigation and scientific testing. Its lunar probes, Chang'e-1 and Chang'e-2 (named for a Chinese moon goddess), have also orbited and mapped the moon [source: China IOSC].

If China continues along this path, it will soon rise to status as a space power on a par with the Unites States or Russia, and if those nations do not act to maintain parity, it may well surpass them.

After all, as we'll see in the next section, the slow and steady approach has its benefits.