If you think Google Maps is pretty cool, check this out. Researchers have used data gathered by the European Space Agency's Gaia satellite to construct the highest-resolution 3D Map of the Milky Way and neighboring galaxies ever made.

The publicly available map is based on observations made by Gaia between July 2014 and September 2015. It provides a panoramic view of our home galaxy, which is 100,000 light years across and 1,000 light years thick. Gaia has managed to pinpoint the precise location and brightness of approximately 1.142 billion of the Milky Way's estimated at least 100 billion stars, and charted the movements across the sky for about two million of them.

"Gaia is at the forefront of astrometry, charting the sky at precisions that have never been achieved before," Alvaro Giménez, ESA's Director of Science, said in a press release on the agency's website.

If you want a glimpse what all the excitement is about — and you've got the time and bandwidth to download an 80-megabyte file — here it is. (There's also a less-detailed 3.9-megabyte version.) The map shows the density of stars observed by Gaia in each portion of the observable sky. The brighter regions indicate denser concentrations of stars, while darker regions correspond to patches of the sky where the satellite spotted fewer stars.

Besides the Milky Way, you'll also notice two bright objects in the lower right of the picture. Those are the Large Magellanic Cloud and the Small Magellanic Cloud, two dwarf galaxies that orbit our galaxy. You can also see some of our other cosmic neighbors, such as the Andromeda galaxy, also known as M31, in the lower left corner of the map. (If you'd like an even sharper view of Andromeda itself, the Hubble Space Telescope captured this high-resolution image in 2015.)

Like any picture of something really far, far away, the map contains some imperfections — in this case, dark stripes across part of the map that aren't actually stars or galaxies. Also, ESA says that because Gaia is still conducting observations, the map isn't uniformly detailed across the entire sky.

Even so, it's a pretty impressive start to mapping the cosmos.

An artist's interpretation of Gaia mapping the Milky Way.
ESA/ATG Medialab/ESO/S. Brunier
Now That's Interesting
At only 100 billion stars, the Milky Way is fairly humble compared to some of the most gigantic galaxies in the cosmos.

Trouble Remembering? Tell Your Friends to Take a Hike

You're Only Ever as Drunk as You Think Your Friends Aren't 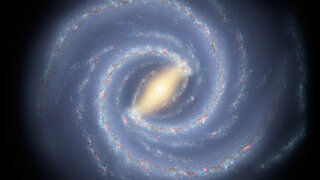