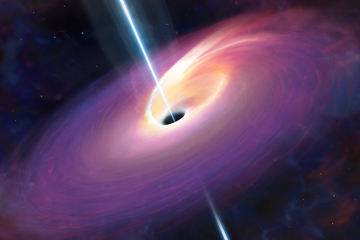 Accretion disks are one way that we can spot stars and even black holes.
© Mark Garlick/Science Photo Library/Corbis

An accretion disk sounds like something you might have installed on an old-school desktop PC in order to load a program. ("To play 'Oregon Trail,' start by inserting your accretion disk.") But accretion disks are way cooler; we find them in some of the most interesting places in the universe. You could spot an accretion disk in a binary star system, or around a black hole, for instance. But how would you even know what you were looking at? The biggest "tell" of an accretion disk is that it surrounds a celestial object (like a star or black hole) with a thick, fuzzy halo.

That celestial ring is the stuff that makes up an accretion disk: gas, dust, matter. In the case of black holes, an accretion disk is formed when any gas or matter that comes near it is snatched into the grasp of the hole. The matter then tumbles down into it.

But hold on a second: It doesn't just fall straight in. Instead, because of a process called conservation of angular momentum, which results from the velocity acting upon a falling object, the matter spirals as it goes in. The spiraling matter gets faster and faster as it gets closer, breaking apart into atom streams. Like water draining in a bathtub, the matter trails around and around the hole. Its atoms flatten out like a twirling pizza pie in the sky — creating the telltale fuzzy doughnut of the accretion disk. Eventually, the matter loses angular momentum and falls into the low point [source: Astronomy Cast].

But why should black holes have all the matter-grabbing fun? Stars also create accretion disks. Imagine two stars in a binary star system. These stars don't just hang out next to each other; the smaller one orbits the bigger one. The big star pulls any gases or matter from the little star into it, eventually gobbling them up — but not before the gas or matter is pulled into orbit around the more massive neighbor, creating (you got it!) an accretion disk [source: Ciardullo].