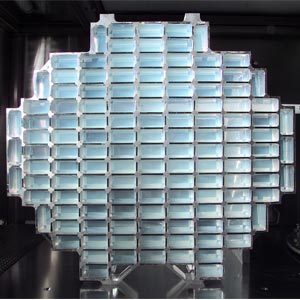 This dust collector for the spacecraft STARDUST was outfitted with 260 aerogel panels.
NASA/JPL-Caltech

Aerogel's versatility has made it very important both on Earth and in space. It has fulfilled a variety of roles on several NASA missions, from insulating the Mars rovers' electrical equipment to capturing space dust from a speeding comet.

Comets are primitive objects that date back to the birth of the solar system. As they fly through space, they cast off particles called space dust. This space dust is much sought-after by scientists who hope it will teach us how our world began.

On a mission to capture comet samples and space dust in 1999, NASA launched a spacecraft that traveled 4.8 billion kilometers (the equivalent of 6,000 trips to the moon) to reach comet Wild 2. Once there, the tennis-racket-shaped dust collector opened up and used its 260 aerogel cubes to capture the speedy particles of interstellar dust and preserve them in their natural state [source: NASA JPL, Aerogel]. What's more, as particles bombarded the dust collector, they left trails within the collector's aerogel cubes while slowing to a stop. These trails enabled scientists to more easily find the tiny particles from space.

When the spacecraft arrived home in 2006, it brought back the first samples returned to Earth from space in more than 30 years. Aerogel's durability allowed the dust collector to return from space intact with not a single aerogel tile missing. Scientists have been able to study the dust and crystals contained in the aerogel and await the insights they may bring [source: Bridges].

Next, we'll learn about some of aerogel's commercial applications.