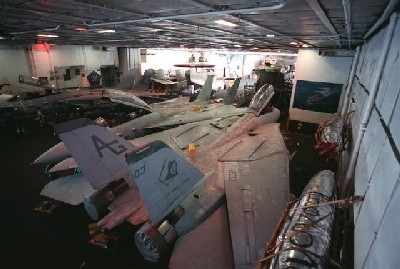 The flight-deck crew can keep a small number of aircraft up top, but there's not nearly enough room for the 80 to 100 aircraft stationed on a typical carrier. When they're not in use, most of the aircraft are secured in the hangar bay, the "carrier's garage."

The hangar bay is located two decks below the flight deck, just below the galley deck. The bay itself is 110 feet (~34 m) wide, 25 feet (~8 m) high and 685 feet (~209 m) long -- more than two-thirds the length of the entire ship. It can hold more than 60 aircraft, as well as spare jet engines, fuel tanks and other heavy equipment, in four zones divided by sliding doors (a safety precaution to stop a fire from spreading).

The hangar is three decks high, and it's flanked by various single-deck compartments on both sides. There are also four giant elevators surrounding the hangar, which move the aircraft from the hangar to the flight deck. The high-speed, aluminum hydraulic elevators are big enough and powerful enough to lift two 74,000-pound (~34,000-kg) fighter jets.

One of the hydraulic elevators on the USS George Washington, lowered to the hangar deck
Photo courtesy U.S Navy

Aft of the hangar bay, in the stern of the ship, you'll find the Aircraft Intermediate Maintenance Division (AIMD) shops. The men and women in these shops are constantly repairing and testing aircraft equipment to keep the flight squadron at full force. At the very end of the ship, the AIMD shops lead to an open-air engine testing area on the ship's fantail. This is the only place on the ship where the maintenance crews can safely blast aircraft jet engines to make sure they're working properly.

Testing an F-14 engine on the fantail of the USS Kitty Hawk
Photo courtesy U.S. Navy

A major part of every aircraft carrier, logically, is the aircraft onboard. Carriers transport dozens of different aircraft specially designed to withstand the constant abuse of catapult takeoffs and arresting-wire landings. A carrier air wing typically consists of nine squadrons, with 70 to 80 total aircraft. The more notable onboard aircraft include: