Landing on an Aircraft Carrier 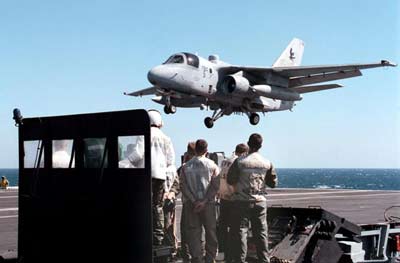 An ES-3A Shadow comes in for a landing aboard the USS George Washington.
Photo courtesy U.S Department of Defense

Landing on a flight deck is one of the most difficult things a navy pilot will ever do. The flight deck only has about 500 feet (~150 meters) of runway space for landing planes, which isn't nearly enough for the heavy, high-speed jets on U.S. carriers.

To land on the flight deck, each plane needs a tailhook, which is exactly what it sounds like -- an extended hook attached to the plane's tail. The pilot's goal is to snag the tailhook on one of four arresting wires, sturdy cables woven from high-tensile steel wire.

The arresting wires are stretched across the deck and are attached on both ends to hydraulic cylinders below deck. If the tailhook snags an arresting wire, it pulls the wire out, and the hydraulic cylinder system absorbs the energy to bring the plane to a stop. The arresting wire system can stop a 54,000-pound aircraft travelling 150 miles per hour in only two seconds, in a 315-foot landing area (a 24,500-kg aircraft travelling at 241 kph in a 96-meter landing area).

There are four parallel arresting wires, spaced about 50 feet (15 meters) apart, to expand the target area for the pilot. Pilots are aiming for the third wire, as it's the safest and most effective target. They never shoot for the first wire because it's dangerously close to the edge of deck. If they come in too low on the first wire, they could easily crash into the stern of the ship. It's acceptable to snag the second or fourth wire, but for a pilot to move up through the ranks, he or she has to be able to catch the third wire consistently.

To pull off this incredible trick, the pilot needs to approach the deck at exactly the right angle. The landing procedure starts when the various returning planes "stack up" in a huge oval flying pattern near the carrier. The Carrier Air Traffic Control Center below deck decides the landing order of the waiting planes based on their various fuel levels (a plane that's about to run out of fuel comes down before one that can keep flying for a while). When it's time for a plane to land, the pilot breaks free of this landing pattern and heads toward the stern of the ship.

Landing Signals Officers (LSOs) help guide the plane in, through radio communication as well as a collection of lights on the deck. If the plane is off course, the LSOs can use radio commands or illuminate other lights to correct him or her or "wave him off" (send him around for another attempt).

In addition to the LSOs, pilots look to the Fresnel Lens Optical Landing System, commonly referred to as the lens, for landing guidance. The lens consists of a series of lights and Fresnel lenses mounted to a gyroscopically stabilized platform. The lenses focus the light into narrow beams that are directed into the sky at various angles.

As soon as the plane hits the deck, the pilot will push the engines to full power, instead of slowing down, to bring the plane to a stop. This may seem counterintuitive, but if the tailhook doesn't catch any of the arresting wires, the plane needs to be moving fast enough to take off again and come around for another pass. The landing runway is tilted at a 14-degree angle to the rest of the ship, so bolters like this can take off from the side of the ship instead of plowing into the planes on the other end of the deck.

As soon as an aircraft lands, it's pulled out of the landing strip and chained down on the side of the flight deck. Inactive aircraft are always tightly secured to keep them from sliding around as the deck rocks back and forth.

The flight-deck crew has to be prepared for a wide range of unexpected events, including raging aircraft fires. During takeoff or recovery operations, they have plenty of safety equipment at the ready. Among other things, the flight deck has a small fire truck, and nozzles leading to water tanks and aqueous film-forming foam, an advanced fire-extinguishing material (there are also nozzles for jet fuel and a number of other useful liquids).

An S-3A Viking aircraft lands on the USS Abraham Lincoln with the help of the crash barricade. The plane had to make an unconventional landing due to a problem with its landing gear.
Photo courtesy U.S Department of Defense

A carrier's real muscle is its aircraft squadron, but it has a number of built-in weapons, as well, to take down any enemy aircraft or missiles attacking the ship. A modern U.S. supercarrier has three Mk. 29 Sea Sparrow eight-round missile launchers and two Mk. 15 Phalanx Close-In Weapons System (CIWS) 20-mm Gatling guns spaced around the flight deck, and an additional Mk. 15 on the fantail. The surface-to-air missiles use a radar-seeker to home in on signals (from the carrier's radar system) reflecting off the target.

U.S. supercarriers also have a number of defensive systems. In the event of a submarine attack, a carrier will launch two SLQ-25A "Nixies," noise-making decoy targets that drag behind the ship to attract torpedos.