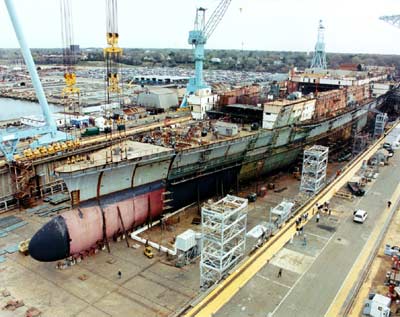 Since the 1950s, almost all U.S. supercarriers have been constructed at Northrop Grumman Newport News in Newport News, Virginia. To make the construction process more efficient, most of each supercarrier is assembled in separate modular pieces called superlifts. Each superlift may contain many compartments (rooms), spanning multiple decks, and they can weigh anywhere from 80 to 900 tons (~70 to 800 metric tons). A supercarrier is made up of almost 200 separate superlifts.

Before placing a superlift module into the ship, the construction crew assembles its steel body and hooks up almost all wiring and plumbing. Then they use a giant bridge crane to lift the module and lower it precisely into its proper position inside the ship; then they weld it to the surrounding modules. Near the end of construction, the crew joins the last module, the 575-ton island, to the flight deck.

Just like the family motor boat, an aircraft carrier propels itself through the water by spinning propellers. Of course, at about 21 feet (6.4 meters) across, a carrier's four bronze screw propellers are in a very different league than a recreational boat's. They also have a lot more power behind them. Each propeller is mounted to a long shaft, which is connected to a steam turbine powered by a nuclear reactor.

The carrier's two nuclear reactors, housed in a heavily-armored, heavily restricted area in the middle of the ship, generate loads of high-pressure steam to rotate fan blades inside the turbine. The fans turn the turbine shaft, which rotates the screw propellers to push the ship forward, while massive rudders steer the ship. The propulsion system boasts something in excess of 280,000 horsepower (the Navy doesn't release exact numbers).

The four onboard turbines also generate electricity to power the ship's various electric and electronic systems. This includes an onboard desalination plant that can turn 400,000 gallons (~1,500,000 liters) of saltwater into drinkable freshwater every day -- that's enough for 2,000 homes.

Unlike the old oil-boiler carriers, modern nuclear carriers don't have to refuel regularly. In fact, they can go 15 to 20 years without refueling. The trade-offs are a more expensive power plant, a longer, more complicated refueling process (it takes several years) and the added risk of a nuclear disaster at sea. To minimize the risk of such a catastrophe, the reactors inside a supercarrier are heavily shielded and closely monitored.

These stats paint a nice picture of the scope of a Nimitz-class aircraft carrier.

From the USS Nimitz Web site: