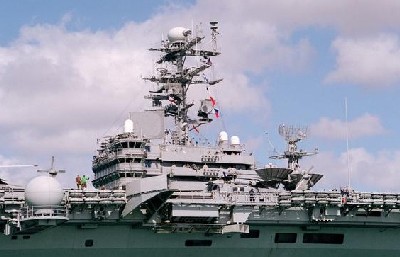 The island on the USS Abraham Lincoln
Photo courtesy U.S Department of Defense

An aircraft carrier's "island" is the command center for flight-deck operations, as well as the ship as a whole. The island is about 150 feet (46 m) tall, but it's only 20 feet (6 m) wide at the base, so it won't take up too much space on the flight deck. The top of the island, well above the height of any aircraft on the flight deck, is spread out to provide more room.

The top of the island is outfitted with an array of radar and communications antennas, which keep tabs on surrounding ships and aircraft, intercept and jam enemy radar signals, target enemy aircraft and missiles and pick up satellite phone and TV signals, among other things. Below that is the Primary Flight Control, or Pri-Fly. In the Pri-Fly, the air officer and air officer assistant (known as the "Air Boss" and the "Mini Boss") direct all aircraft activity on the flight deck and within a 5-mile (8-km) radius.

The busy scene in the Pri-Fly
Photo courtesy U.S Department of Defense

The Air Boss and Mini-Boss, both experienced aviators, have an array of computers and communications equipment to keep tabs on everything, but they get a lot of information just by looking out their windows, six stories above the flight deck. When an approaching plane gets within three-quarters of a mile (1.2 km), the Landing Signals Officers take over control to direct the landing procedure. At the same level as the Pri-Fly, crew and visitors can walk out onto vulture's row, a balcony platform with a great view of the entire flight deck.

The next level down is the bridge, the ship's command center. The commanding officer (the captain) usually cons (controls) this ship from a stately leather chair surrounded by computer screens. The commanding officer directs the helmsman, who actually steers the carrier, the lee helmsman, who directs the engine room to control the speed of the ship, the Quartermaster of the Watch, who keeps track of navigation information, and a number of lookouts and support personnel. When the commanding officer is not on the bridge, he puts an Officer of the Deck in charge of operations.

Interestingly enough, many carrier commanding officers are former Navy airplane pilots, so they have a personal understanding of flight-deck operations. As long as they're in command of a carrier, however, they're prohibited from climbing into the cockpit to fly a plane themselves.

Just like the Pri-Fly, the bridge is outfitted with an array of high-end monitors, including GPS receivers and many radar screens. But the commanding officer and his team still rely heavily on their own eyes to keep tabs on activity around the ship.

The level below the bridge is the flag bridge, the command center for the admiral in charge of the entire carrier group. Below that, there are various operational centers, including the flight deck control and launch operations room. In this tight, windowless space, the aircraft handling officer (also called the handler or mangler) and his or her crew keep track of all the aircraft on the flight deck and in the hangar. The handler's primary tracking tool is the "Ouija Board," a two-level transparent plastic table with etched outlines of the flight deck and hangar deck. Each aircraft is represented by a scale aircraft cut-out on the table. When a real plane moves from point to point, the handler moves the model plane accordingly. When the plane is out of service, because it needs repair work, the handler turns it over.

Crew members on the USS George Washington circle around the "Ouija Board."
Photo courtesy U.S Department of Defense

There are a number of additional control centers below deck, including the carrier air traffic control center (CATCC), which takes up several rooms on the galley deck (immediately below the flight deck). Like a land-based air traffic control center, the CATCC is filled with all sorts of radio and radar equipment, which the controllers use to keep track of aircraft in the area (in this case, mainly the aircraft outside the Air Boss's supervision).

The CATCC is next to the combat direction center (CDC), the ship's battle command center. The CDC's primary responsibility is to process incoming information on enemy threats in order to keep the commanding officer fully informed.